I had to have my ash tree taken down last summer. 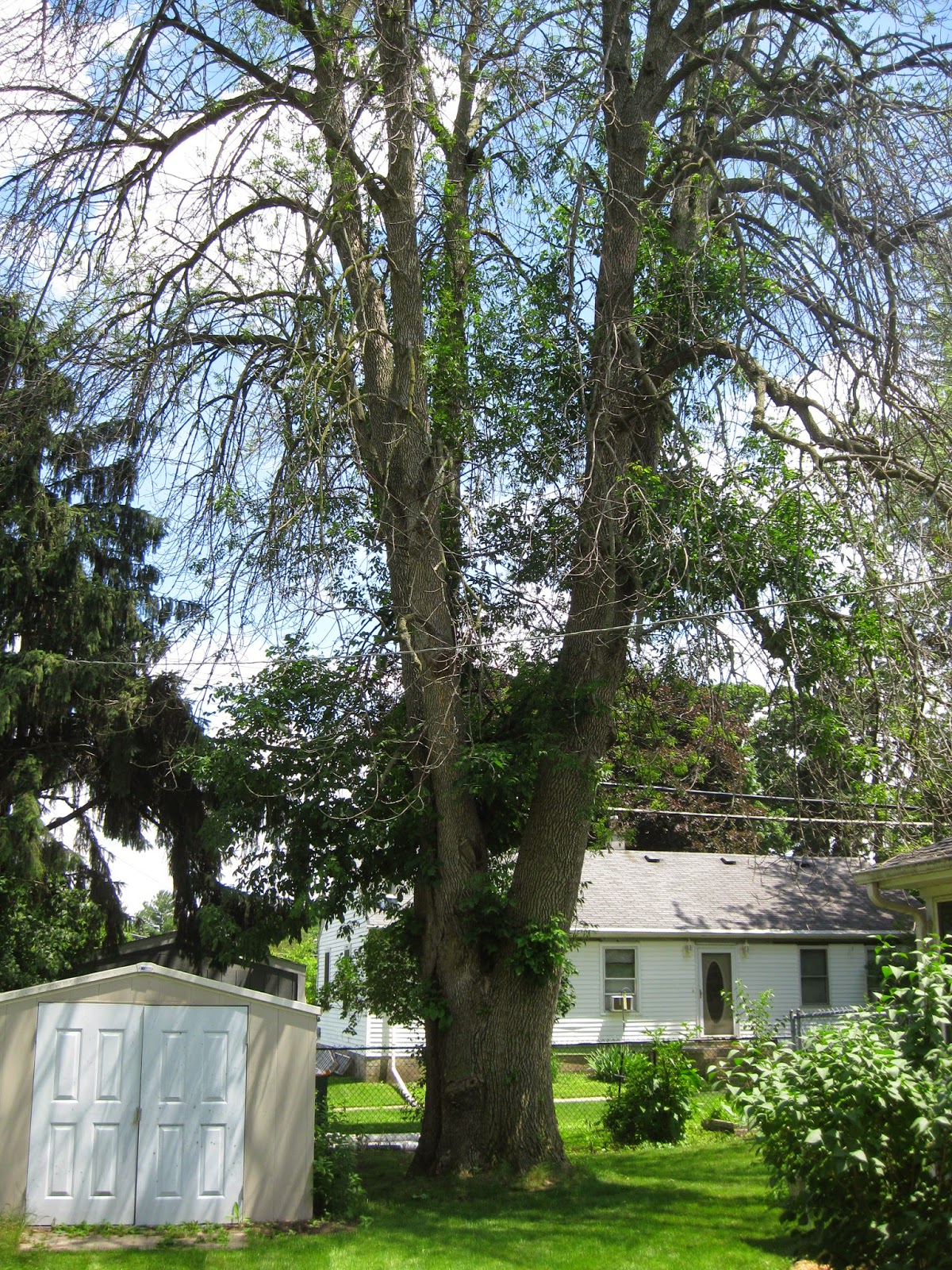 It’s just a guess, of course, but it likely stood on that spot for more than a century.  This means it would have pre-dated my house and all the other houses up and down my street. It would have taken root and grown long before Meadow Lane and Edward Street were paved. Its branches towered high above the families that call my neighborhood home. My arms would not reach around it. In fact, once it had been removed it was evident that it was more than six feet in diameter. It was a big tree.
Only a little bug called an emerald ash borer got the best of it. Or likely more than one of those insects managed to take the life out of it.
Now I’m no biologist, but here is how I understand it. This insidious insect digs its way under the bark of the ash tree and essentially cuts off the nutrients which would otherwise make their way to the tree’s branches and limbs. Indeed, I suspected something was terribly wrong in the spring when I looked up to see that while there was still growth, the canopy of the tree was not leafing out. My sister Martha, who does no more about these matters than I do, was here on a visit and confirmed it. Shaking her head she said it would need to come down. 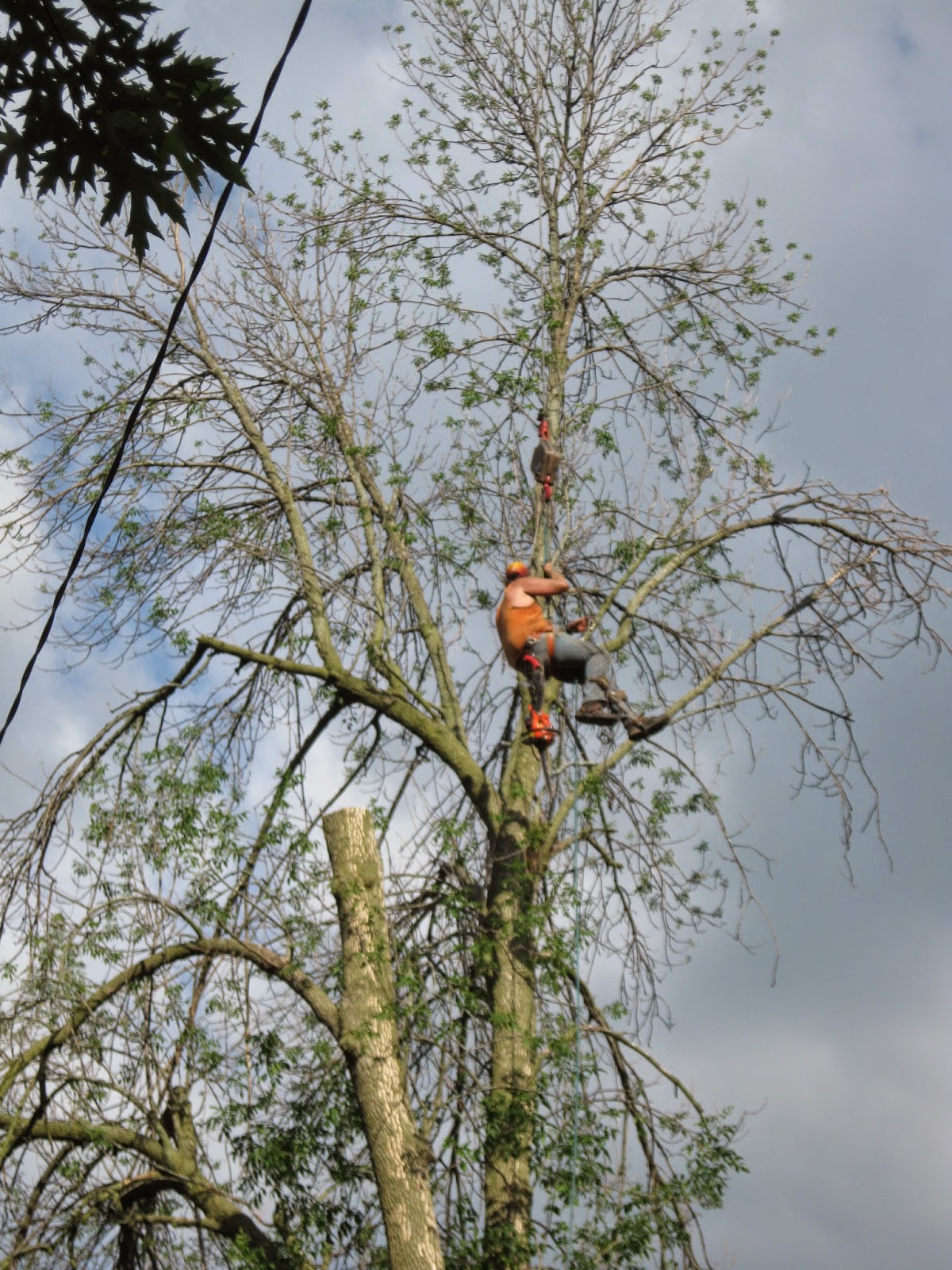 Once I knew this, I found myself anxious every time it stormed. The houses sit pretty close together in my neighborhood. A strong wind could put both lives and property in danger should it be taken down by wind or lightning. So I asked for suggestions and started calling around. It turned out it would not be so simple. For you see, a couple of those whose business it is to take down trees would have nothing to do with the job. Though surprised, I could understand their refusal. This giant tree stood in my back yard between a shed and a garage behind a fence with power lines all around it. Finally, I got someone to place a bid. He quoted me $4,000, less if I paid cash. We set a date and on a sunny afternoon in June they came in with a crane, a tree chipper, a couple of trucks, a handful of workers and one especially brave man who had, apparently done this hundreds of times before. To tell you the truth, he looked more than a little worse for wear, but seemed to take it in stride as he harnessed up and put his life in the hands of 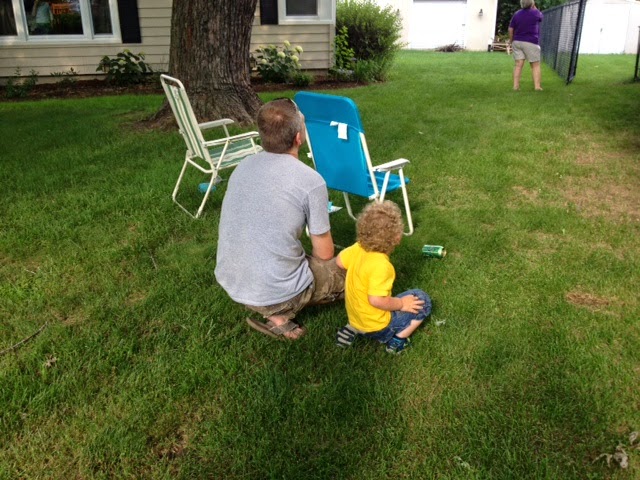 the crane operator. Up he went, again and again, roping himself to the tree, and cutting off limbs which were comparable in size to a whole lot of trees I’ve seen. Again and again those limbs came down and were cut down to size and carted off or chipped for mulch. These guys worked all afternoon and were done by nightfall. And a tree which had stood for a hundred years was only a memory. (As the day wore on, you can just imagine the show it turned out to be for all of my neighbors! Indeed, almost a year later, some are still talking about it.)

For most of us, one does not have to look far to find every day examples which help deepen our understanding of what Jesus is getting at when he compares himself to the vine and you and me to the branches. It almost goes without saying that once a branch is cut off from its life source, it is simply not going to live long, not to mention be at the end of its fruit bearing potential. This year, at least, I find myself remembering that beautiful old tree. And yes, I find myself thinking of that tiny emerald ash borer and its friends which could not be seen from the outside, but whose damage was deadly. And I wonder at what things get under my ‘bark’, under my skin, into my mind and heart which threaten to cut off that which feeds my spirit or our spirits together as communities which are called to abide in Jesus, this One who gives us life.

Oh, it is so that it would be easy to turn these marvelous words of Jesus into pure ‘law.’ Perhaps this is because one does not have to look very far to come up with a list of do’s and don’ts, shoulds and should nots which when accomplished could well help us to continue to abide in Jesus. Indeed, I’m told that with proper maintenance, I probably could have done something to keep those emerald ash borers from taking up residence in my tree. On its own the tree could not prevent this deadly invasion, but as its keeper, I surely could have. Perhaps it is the same for you and for me. We cannot do this on our own. But Jesus can. And in the end, isn’t that really the point of the image Jesus offers us today?

Indeed, it may be nigh unto impossible for us to fend off the host of things which threaten to interfere with our staying alive in Jesus. Think with me of all that would make up that list. Temptations and trials, unrealistic hopes and ungrounded fears, undeserved wealth and unjust poverty, talent as well as neglected potential. Any and all of these and a thousand more left on their own can easily cut me off from the only source of life that really matters. And they could do so in a way that I don’t even notice at first… until I start to realize that around the edges I am simply dying.  Like my tree.

So yes, I suppose these words of Jesus are warning us that we are to stay close, to allow ourselves to be nurtured as automatically and as easily as a branch takes in the nourishment of the vine. And yes, there may be things we need to be vigilant about so that we don’t come to believe they could actually take the place of the Vine. For oh, don’t we know in our hearts and minds and souls that nothing can stand in its stead? More than that, though? It seems to me that Jesus is offering us an amazing gift in these words. We have been handed the source of life itself. Why in the world would I allow anything to get in the way of my receiving it? All we have to do is stay attached.

And this much is so. Jesus is a whole lot more attentive to you and me than I was to my poor ash tree. As I only allow myself to stand still in his care? That is enough to fend off all that would threaten to take my life. Indeed, that will always be enough.