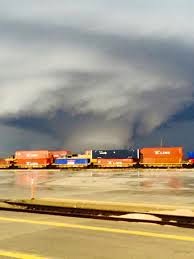 I had never heard of a ‘wedge’ tornado before, but now I’ll never forget it. A wedge tornado is wider than it is tall. I heard tell of one woman who was looking right at it and didn’t see it for she could not discern the edges of it. It just looked like one massive storm cloud to her.

To be safe, we spent some time in our basement, but the storm missed us by miles. Others were not so fortunate.  Reports are that thirty lost their homes in Rochelle— the town where I grew up.  And fully half the town of Fairdale which is north and west of us, is gone. Two have died. Countless climbed out of their basements to find their worlds in shambles.

It has been said that this storm was one of the best covered in history. And it is so that even while we still sat in the basement I was calling up pictures of this massive tornado on Facebook. I could not look at it, cannot look at it without my stomach churning. (That kind of immediate social media coverage has continued, as you can imagine.)

On Friday morning I headed out early. I had seen the call for toiletries at the church where I grew up so I hit the store when it opened and stocked up on toothpaste and toothbrushes and started driving west. A small thing, yes, but in the wake of tragedy one wants to do something.

I stopped at the church first where a handful of volunteers were organizing the gifts people were dropping off.  I have known Linda since I was in high school for those many years ago I babysat her then young boys. She hugged me and shook her head and said, “Life is fragile.”  And oh, isn’t it!?

I stood with the pastor a while. Her house had been damaged, yes, but when they stepped outside after the storm had passed she and her family were devastated to see that their neighbors’ homes were gone.  Just gone. Her husband pulled out his phone and began to show me pictures of driveways to nowhere.

I tried to get close to where the tornado went through — not just out of curiosity, but because my mother owns a lot out there. There are no structures on it so I know there can be no damage, but she was worried there might be debris. The road was closed, of course. On my way I got in a traffic jam in Flagg Center.  Local friends will know how amazing that is. When I got close enough I realized that all the news trucks were parked at that intersection. People like me couldn’t help but pause to stare. I circled back and headed towards town. I drove by all the houses I had called home and they appeared untouched by the storm. With nothing else to do, I drove on home. Ever since I haven’t gotten too far from the news though… 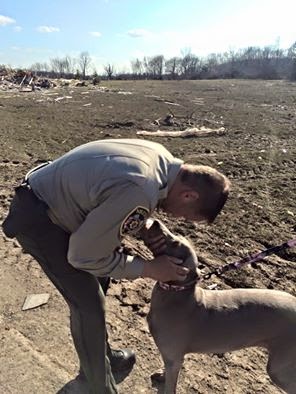 And here is one thing that has caught my attention. People have been faithful about ‘spreading the
word.’ My news feed is inundated with photographs and videos and suggestions about how to help and stories of loss and stories of survival and stories of courage and stories of hope. And again and again people have posted pictures of lost pets. Sometimes the messages have gotten a little confused, though, as it has been hard to tell if the picture shared is of a recent reunion or just an old memory. One touched me so much, though, that I shared it, too. It is of the local sheriff and his dog. Apparently, when the tornado went through, the dog was the only one home. Unlike other animals who fled in their confusion and fear, this one stayed put. When the family returned, there she was in the rubble waiting for them. Their reunion is pictured here:

Now I know that I am using this forum to ‘work out’ a story which I need to tell and will probably need to keep telling for some time. Thank you for bearing with me. At the same time, it is so that whenever we experience or encounter loss and hope, devastation and unexpected life, we get a window into what the disciples must have experienced that first Easter so long ago. No, of course, it would not be fair to compare them to family pets who in their terror fled for their lives even while that is exactly what they did on that fateful Friday. At the same time, before long they came to their senses and gathered together — even those two who had made their way all the way to Emmaus realized the importance of being with the rest back in Jerusalem, especially after their encounter with Jesus over a meal. I don’t know what would have become of them if Jesus had not made his presence known when he did. Indeed, perhaps if he had not told them to stay put for the time being they would have gone back to whatever their lives had been before they were called away from their fishing boats and other places of business three years before.

So here is what I am wondering now.