Several years ago I served on a bishop’s staff.

It was early on the Friday morning of the first Synod Assembly he would preside over.  For such gatherings one always wants things to go smoothly, but never more than the first one.

The evening before we had been out to dinner with staff and officers. The meal was cut short because of the terrible storms that blew through.  When the restaurant lost power we knew it was time to call it a night.

As I drove home the evidence of the storm was all around me. Whole oak trees had been pulled up by their roots.  When I arrived home I discovered I was also without power.  I was certainly grateful when I heard it click on at 1 a.m. but a few hours later I found myself in the basement hard at work with a shop vac. 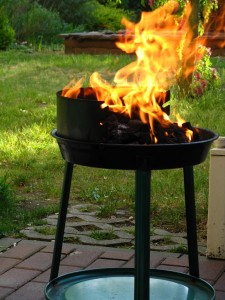 It was still very early when I ran upstairs to pick up a ringing telephone. It was our bishop calling. Apparently at his hotel they were still without power.  It would probably have been a sleepless night for him anyway, but this really gave him something to focus his anxiety on. He spoke aloud of seven hundred Lutherans who would be driving into town in a few hours and he wondered then about how we were going to feed them if there was no power… He had already worked out an answer to his wondering, though, for in his next breath he suggested that in the next couple of hours I call every Lutheran church in town and ask them to put out a call for charcoal grills.  “We’ll set them up on the football field,” he said.  “And we’ll make sure everyone is fed.”

I can still remember standing in my pajamas and smiling to myself as I listened.  I assured him that I was certain Augustana College (the site for our Assembly) had everything well in hand — but I promised I would get over there early to be sure.  Sure enough when I arrived a little before seven o’clock the lights were on, although our hosts told us they were just minutes from renting a refrigerated truck to preserve the food waiting to be served.  In the end, seven hundred Lutherans were fed in the usual way that week-end — having no idea how close they came to being part of a miracle much like the one those who first followed Jesus experienced so long ago.

There are, of course, a variety of interpretations for the story before us now.  Some prefer to think of it as a kind of supernatural miracle — where a boy’s meager lunch was, by Jesus’ touch, able to serve thousands.  Others insist it would be as much of a miracle if, following a child’s example, everyone simply ‘put on the table’ what they had brought — thus seeing to it that everyone’s hunger was satisfied.  In a world where we are all too quick to hold tight to what is ‘ours’ and awfully slow to share, the latter would seem to be as amazing an event as any.

It’s hard to say which interpretation is best.  In the end, perhaps it is enough to simply hear this story as a vivid reminder that there is enough.  In Jesus’ presence there is always more than enough. Enough food, enough space, enough kindness, enough…

At the same time, I do wonder what would have happened if thirteen years ago I had found myself calling up every Lutheran church in town, putting out a call for charcoal grills.  Wouldn’t that have been a sight to see?   And wouldn’t that be a story we would still be telling?