This is an old story, but it’s one I return to over and over again.

I was new in a call and still a relatively new pastor.

The congregation where I was pastor had been through a tough conflict before I arrived, but I was young enough and naive enough so that I didn’t fully realize all the hard work that was before me.

I had been there about six months when I received a letter from a leader in the congregation.  In it she enumerated her complaints about my ministry.  It seemed that from her point of view in the short amount of time I had been there I had done a great deal wrong.  In fact, I believe she wrote out at least fifteen mis-steps I had made, carefully spelling them out for me one by one.

I’ll not soon forget sitting in my office and opening that letter.  I can still remember the flood of emotions I experienced as I read it: anger and shame and fear all rolled into one.  I put the letter in my top desk drawer.  Then I pulled it out again.  The first few times I read it I could only react to her words.  After my fourth or fifth reading and after several days I was able to begin to comprehend it.  By about the twelfth reading I could finally admit there was some truth to what she said.

I knew almost from the start that I couldn’t leave that letter unanswered.  And so finally I called the sender of the letter and asked if we could meet.  A few days later she came into my office and sat opposite me.  She pulled out her copy of her letter. I had mine open as well.

I hope I prayed with her first, but I honestly can’t recall if I did.  I only remember walking through her points one by one and admitting that she was absolutely right about numbers one, two and four.  And that there may have been some truth to number three, but as for the rest, well, I couldn’t agree with her there.

Something happened though as I owned my part of the responsibility for what lay broken between us.  The tension in the room dropped.  We were able to talk openly about the hurt behind her complaints and I was able to ask her forgiveness.  And while it’s true that she and her husband did finally leave our congregation for another one, they did not leave angry.  And since their daughter and grandchildren remained and were active in that place, they chose to visit from time to time and our encounters were always cordial.

I’ve told this story dozens of times — whenever I’ve been called upon to lead a workshop on congregational conflict resolution. After I told it to a gathering of intern pastors and their supervisors one of the more seasoned pastors piped up and said, “But, Janet, all she cared about on her list was 1, 2, and 4.  She was just piling on with the other 12!” 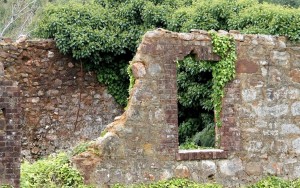 I imagine he was right, although that hadn’t occurred to me before that.  Even so, it was a pivotal moment in my life as a pastor.  I learned to take responsibility and admit my mistakes when they were mine to own.  I learned how important it is to do so face to face.  And I was gifted with a real experience of ‘Christ as our peace’ that we hear about in our second lesson for this week-end.  For what had been broken experienced some healing that day. In ways I hardly knew to hope for when I first made that call to invite her to come in and talk to me, the wall that divided us was no more.

Now I suppose one does not have to attribute such as this to Jesus.  And yet, I am grateful to be able to say that it is among the community of God’s people I have learned it best: the truth that yes, I will certainly make mistakes, but there can also be forgiveness among the saints like nowhere else.  And while, yes, I’m certain this can and does happen in other ways and places, I haven’t much seen it.  Indeed, as God’s people we have the opportunity to model this for a world which sees it almost nowhere else.

Unfortunately, this is not always the case.  In fact, I know that far too many of us can tell stories of  times and places where we feel a whole lot more like strangers and aliens than like members of the same household of God.  Places and people among whom walls continue to divide us in the very places where they should not.

And so it is also true I have over and over again called God’s people to seize the amazing opportunity that is ours to bear witness to the ‘peace that is Jesus.’  To pay attention to what it means to be about tearing down the walls of anger and hurt and fear that would divide us.  And for us, it seems, it always begins with this: standing still in the blood of Jesus: that blood that signifies and teaches us to emulate great love and profound sacrifice and enduring hope in the face of that which would break us apart.  And perhaps sometimes the next step is as simple as admitting when we’re wrong.