I cannot help but believe that all of us have experienced something of ‘storms’ in these last many months in a way perhaps we never did before.

And no, not only the sort of midwestern squall which passed through here the other day, bringing much needed rain to the drought which is already taking hold this summer in the place I call home — the one which had me scrambling to safety because of predicted winds and hail.

For while such storms are powerful and can and often do certainly threaten life and property and much of what we hold important, I find that I read the story before us now more as metaphor for the other sorts of ‘storms’ we have found ourselves weathering of late.

Now it is not that ‘storms’ don’t come to all of us. Certainly they do and we can all recount instances of storms survived, storms through which we received shelter, storms which left us changed in good ways and hard ones, too.  Even so, the constant battering of ‘storms,’ both inside and out, which I have experienced in the last year and a half has been unlike anything I had ever known.

For this has been so, hasn’t it, that most all of us at one time or another or at multiple times in the near past have looked down to see that our ‘boat was already being swamped?’ If not physically, then emotionally, spiritually…

That our identities, perhaps, or our futures, or our understandings of how things work in the world, or our lives or the lives of loved ones were threatened, perhaps even taken by a virus which mysteriously affected one and not another?

Oh yes, we have known ‘storms,’ haven’t we, the sort that stripped the familiar landscape bare, forcing us to look at things as they really are, revealing that to which we were perhaps blind before?

And yes, even now as things limp their way back to some semblance of ‘normal,’ in some ways the same terror those disciples must have felt has not entirely left us:

And the truth is, this is the easy part of this reflection to capture in words:

Or at least I do.

And yet this is so:

I saw something of this a few days back.  I was accompanying a group on a Civil Rights Tour through parts of Alabama, Mississippi, and Tennessee. We were in Selma where 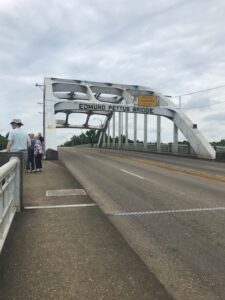 we were joined by a guide who with powerful enthusiasm and deep hope told us the story of her beloved city and its significance in the Civil Rights Movement. She spoke to us of ‘storms’ which had led to loss of life and injury and the battering of hope, the effects of which are still known there today. And she told of the many storms which preceded those you and I probably know best. Only she did not stay in a time past which seemed to climax nearly sixty years ago. No, like any good historian, she stood on the ground today and showed how what happened then affects her community now. And she said this, although not in these exact words:

Indeed, she reminded me that we do so much better when we acknowledge the ‘storms,’ learn from them, and yes, remember that something, Someone with power and love which so far exceeds our own, is in the ‘storm’ with us, giving us what we need for whatever is next.

Perhaps in much the same way, I cannot imagine those disciples were ever the same again after weathering that storm and witnessing the power of Jesus in the midst of it.

As we get some distance from the particular ‘storms’ we have recently come through, I expect we will not be the same either — especially as we accept the invitation to recognize what has been revealed in us and in the world, as we reflect on all of its meaning, and as we are able, more and more, to see how Jesus has been with us in it and at work in it all.

May we also recognize the power of Jesus both in the midst of the storm and in the wake of it and in each of us.

May we speak of it. Celebrate it. Learn from it, from all of it. Lament what has been lost, to be sure, but also be grateful for the gifts which are ours now, only because we have been through the ‘storm.’ And recognize how we have been changed by it.

Most of all may we live as those who better know the One who even the wind and the sea obeys.

Who has been there in the boat with us all along.