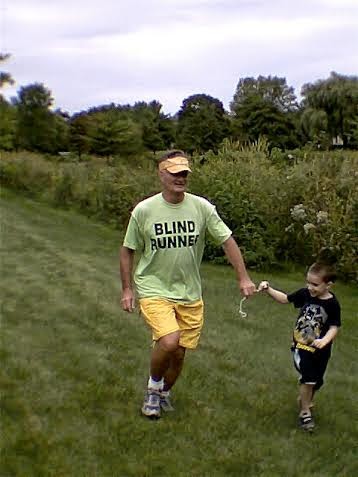 “I have finished the race…”

I am not a runner.  I can jog a little.  I love to walk, but hitting the pavement hard over and over again is something I’ve never done with joy and haven’t even really attempted in more than thirty years.  The closest thing I know to ‘enduring that sort of physical exertion’ is when I ‘finish’ my 45 minutes of yoga every Tuesday morning.  And yes, normally it is enough for me just to finish.

So no, I am not a runner — I’m not even much of an athlete, but I know those who are — who live for the race.  When asked, they will say the medals are a motivator, to be sure.  But more than that is the feeling of accomplishment — especially if it’s a race of any distance.  And sometimes even more than that, what they remember most of all is the companions they encounter along the way.

David, a member of my congregation is running these days.  He has been a runner for some time — competing in and completing a number of marathons.  What makes his story unique is that David is legally blind.  He can see no more than five feet in front of him.  (He is pictured here with his grandson as his guide.)

I caught up with him by phone one morning this week in Missoula, Montana.  Not long ago, he committed to running 11,000 miles around the perimeter of the country to raise money for Cystic Fibrosis Research.  His grand-daughter has it, you see, and he wants to do what he can.

He’s running 11,000 miles and as he does so, he is making regular stops along the way.  His disability keeps him from running directly from one point to another, so he’s pausing in places like Missoula. Only while he may be in one place for a few days, he’s certainly not standing still.  In Missoula, for instance, he spent hours running the track around the high school for miles and miles to make up the difference of what he can’t do on the open road. And while there, he enlists the help of local folks.  He said to me that his disability is a blessing for you see, he’s discovered that people are curious about the ‘blind grandpa’ who is running.  They come out to see him and they learn more about the cause he’s committed the next 11,000 miles of his life to.  He also said this.  People are standing in line to be his ‘guide.’  Whether it’s a marathon or the last Ironman Triathlon he just completed or along this long journey, people want to run the race with him.  And he said this. He said that those in endurance athletics are the best people. While there is a spirit of competition, they are always offering advice and help to one another.  Apparently, there is a strong sense of ‘all being in this together.’

I have heard it said that the life of faith and life in the church is like this. Or at least it could be, should be.  We who are in it know, of course, that this is an endurance ‘sport.’  We know that we are in it for the long haul.  And at its best, it is like this, don’t you think?  That when we, with Paul finally say, “I have fought the good fight, I have finished the race” we, too, will be able to say that it was a run that mattered, that saved lives, and that we were good companions to others on the way — offering advice from our own experience — extending gifts that others might not have — and receiving with joy what others so generously offer.  Paul speaks in the first person here and there is no arguing that he was speaking for himself as he was apparently deeply aware of the nearness of the end of his own physical life.  And yet, while we hear these as words we also strive to emulate, it seems especially important to hear them as pointing to something you and I are called to do together — with each other — finish the race, that is.  Even though the actual finish line may come at different times and  places and under varying circumstances.  For surely, even though it is not spoken directly here in these verses in 2 Timothy, as Paul ran the race, he did so always together with others of God’s people. The actual fact that these words were written in the form of a letter of profound encouragement to Timothy (and read and overheard by millions) is testament enough to that.

David has a window into the best of what this can be that many of us whose disabilities are less obvious may never have.  Indeed, he says his disability allows him to see a goodness in others he might not otherwise see.  In fact, as we spoke the other day he said that if he got the call tomorrow that there was a cure for his blindness, he would surely go — but he also said he would say, “I’m coming. But I have few things to do first.”  And he repeated again that his blindness is a blessing for because of it he has experienced the world in a way he never would have otherwise. I carry his words with me now, wondering if I, too, would experience the world differently if I also could somehow just embrace the ‘weakness’ in me.  It’s another text, another sermon, I know.  But it is also one well worth pondering.

If you want to follow David’s run — or if you’d like to make a donation to the cause, you can do so through his website:  It’s All I Can Do.