I am remembering today a conversation I had with my dad a long time
ago.  I was probably in college — home working for the summer.  We 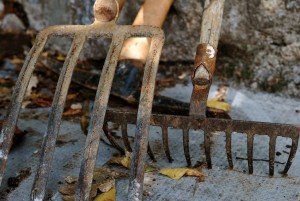 were out in the garden late on a summer afternoon where he could have been leaning on a pitchfork digging up potatoes or loading tomatoes or squash or cucumbers into buckets to be enjoyed an given away.  And he was talking about his life.  About choices he had made.  He told me then what I had observed my whole life long but hadn’t known it was a conscious choice before hten.  He said to me, “You know, Janet, I never played golf.”  (I knew this, of course.)  “I always wanted to have hobbies that kept me closer to home so I could spend more time with your mother and you girls.”  I knew this, too, of course, as we stood then in the garden — one of those ‘hobbies’ — which more than fed our family of six and a whole lot of other families, too.

It was about choices, of course, as it always is.  I know, also, that when given the choice, he never took a transfer with his job: so as a result he never made a lot of money.  His reasoning was the same.  He did this also for the sake of us: for he had grown up moving from place to place, following his step-dad’s work. He wanted something different for his daughters.

Now the choices he made don’t begin to compare to the one placed before the man kneeling at Jesus’ feet in this week’s Gospel lesson.  At least not in scale. Indeed, the choice placed before him is so extreme that I find myself enumerating the reasons why what Jesus proposes now would be entirely out of reach in 2012.  I mean, how is it that any one of us could actually sell all that we have in order to follow Jesus?  What about our families?  What about health insurance? What about the fact that my house wouldn’t sell in this market anyway? And how could I possibly serve Jesus anyway without a car/cellphone/laptop computer?  It is beyond the reach of my imagination for me today.  I expect this was also so for the man in the story before us now.

So perhaps it is true that we shouldn’t pile up our excuses and move too quickly to step back from the magnitude of the requirement Jesus places before the young man now.  For what Jesus invites him to now is a life that is less about keeping the law and more about living the Gospel.  What Jesus invites him to now is a life of meaning and purpose which so far had evaded him — else I expect he wouldn’t have found himself prostate at Jesus’ feet begging for another way.  No, I expect we would do well to stand still in this for a moment or two longer than what makes us comfortable.  Because for all the apparent unreasonableness of Jesus’ proposal, that life of meaning and purpose this man was looking for is some thing we still yearn for, and which by God’s gift is still somehow available to us.

I think my dad knew a little of that.  Oh, together with my mom, he worked all his life and no one at their table ever went hungry.  The bills were paid on time and they managed to help four daughters go to college and beyond.  The cars were never new, but they usually had decent tires and the oil was always changed every 3000 miles — something he learned to do himself.  No, he never sold all he had, but he made choices all the same.  Choices that were right for him.  Choices in keeping with what he felt he was called to be and do. As a husband and a dad, to be sure, but also as a person of faith.

Indeed, I am comforted to hear that before he’s done today Jesus admits to his disciples and to all of us that what he speaks of would be impossible for any one of us.  And I find I rest, too in the realization that the demands of discipleship placed on each and all of us vary from person to person.  For what we hear is that as Jesus looked at the man before him now, he loved him. And to love him, he had to know him, recognizing in him the whole journey which had already been his and quickly assessing what he might be capable of next. He had kept the law all of his life, to be sure.  He was a person of apparently extraordinary faith — so much so that in Jesus’ assessment, he was ready next to give it all away.  To put his trust somewhere other than in all those possessions which had shaped and defined him.  I hear this story and I wonder to myself what it is I’m called to give away and how I’m called to trust more deeply.

And so it is I find myself especially grateful today that part of the story for us as well is that Jesus looks at us in all of our striving, all of our struggling, all of our trying and failing and sometimes stopping before we start. Jesus looks at us and loves us, too. And that love is made known to us in his invitation to follow him more deeply and surely than we did yesterday.  Indeed, for the sake of lives that matter, I expect Jesus is reminding us, too, that it’s about choices.   Choices which shape our every day.  And for all the truth that I am not capable of being and doing what it would take to make my own way into heaven, the promise is that’s already been done.  And so maybe, just maybe, the gift and promise of the story before us now is that you and I get a taste of the eternal life Jesus offers us even now even in small ways as we make choices which mean giving away part of ourselves for the sake of something more as we seek to follow him.