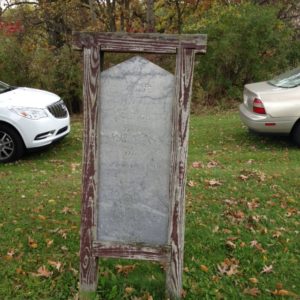 Last week-end I traveled with my mother, a couple of my sisters, our aunt, a cousin and some distant cousins to the family cemetery in west-central Wisconsin.  It’s a small cemetery with a gravel road off County H leading up a hill to it. When you go to leave you are driving down hill on grass. The church once stood there, but long before our memory it burned down and was rebuilt in town.

We had gone to bury my mother’s sister who died this last summer. Much of the next generations have scattered and settled and later been buried in places far distant from this place where we started. Thus it is so that as I wander between the gravestones my memories of those who rest there are distant ones now — or are fed only by the stories told about them. This is certainly so of my mother’s mother, Mabel, who died just a few months before I was born.

We only have a few photographs of Mabel — one of her standing stiffly and staring unsmiling into the camera on her wedding day and another of her later in life wearing an apron in the garden. I have heard the stories, of course, and these have rounded out my “memory” of her. None of these stories is more precious as the one I offer now, for it tells me something of what had been written on her heart. Something about mercy. And unconditional love. It came to me again when Aunt Carol stood next to me, looking at the gravestone pictured here. “This is the one, I think,” she said. “This is the one Mother moved.”

Now I don’t know for sure when this took place — sometime in the 1940’s or 1950’s. And this particular stone certainly looks a lot older than that. In fact, as you can see, at some time it had apparently toppled over and had been roughly held up by the wood framing it now. So the time frame escapes me, but the story does not. For you see, at one time this gravestone stood outside the boundaries of the cemetery for he had died at his own hand. In that now distant time the church did not go easy on such as this and perhaps as a crude warning to others, the one who died in this way was not allowed to be buried within the bounds of the cemetery — not in ‘holy ground’ such as this. And so it was that the body and the stone were on the other side of the fence.

Now Mabel did not have the strength or the wherewithal to actually have the body moved, but she made her point nonetheless for the story goes that in a fit of righteous outrage she picked up the stone itself and moved it into the cemetery where it still stands. Oh, she had been taught the difference between right and wrong from her youth. Probably that included something about suicide being murder — being sinful. But in her heart, mercy ruled. And living in the faith which framed her life? God’s love was absolutely unconditional.

The words of the prophet Jeremiah were spoken at the time when the people of Israel were in exile — both those who had been carried off to Babylon and those who were left behind to live under foreign rule. This prophet, like all the rest whose messages too often fell on deaf ears in the generations before, spoke the truth that turning from God would have dire consequences — and that it little mattered what they said or how they worshiped if it did not show in lives marked by justice and mercy and generosity and kindness. By the time Jeremiah speaks today, the people are suffering the results of their waywardness and these particular words come as ones of promise and hope. Indeed, Jeremiah reaffirms God’s claim on them — only this time the law will not be written on stone tablets but on their very hearts. God would engrave God’s intent on their inmost being. This would change who they were and who they would be. And this would surely show in how they lived. As it did with Mabel.

Now it could be, of course, that Mabel’s intent was to spare those who came after the one who died — so that all the generations which would follow would not be marked by this wound. This, too, would be in keeping with the prophet’s words for just prior to the promises shared today, Jeremiah reverses the curse which too often is found to be true for in verses 29 and 30 we hear,

“In those days they shall no longer say: “The parents have eaten sour grapes, and the children’s teeth are set on edge.” But all shall die for their own sins; the teeth of everyone who eats sour grapes shall be set on edge.”

To be sure there would be mercy in this, too. And yet, knowing Mabel’s children well, I expect her intent was to communicate the certainty of God’s loving promises for the one who had died as well. Not only for those who would follow.

And so I travel still to this cemetery far from my home now and I wonder at what was written on the hearts of those I know who are buried there and on the hearts of those I never knew but who are still also mine. I wonder at God’s claim on them and on me. Along with the people of Israel so long ago what is written on our hearts must have something to do with love and hospitality, mercy and kindness, don’t you think? And I wonder, as a result what “stones” God would have me pick up and return to their rightful place. Within reach of God’s love and mercy. And not only in cemeteries, of course, but in my neighborhood. In my community. In our nation. In this world. What do you think?