Skip to content
Luke 13:31-35
It’s an odd story, this one, and but a moment in time.  Many of us have far more poignant stories than this one… this is just the one that comes to mind this morning.
I was in college and was traveling with my mother, returning from a visit to a friend.  We had stopped at a deserted rest stop and I had made my way to the ladies room.  My mom waited in the car.  As she sat, she glanced up to see a man emerging from behind the wooden structure.  She watched him and noted that his behavior was menacing.  When I stepped out to return to the car, I did catch sight of him, and was anxious enough that I picked up my pace.  When I looked up, I saw my mother.  She had opened her car door and was standing, eyes fixed on the man behind me.  She stared him down and he came no closer.
I am not a mother myself, but if my mother is any example, it never ends.  They willingly put themselves in harm’s way to protect their young.  They will expose themselves to all kinds of dangers to ensure that the one they love is safe.  No matter how old the child is…  And yes, more than once I am sorry to say, I have stood by in our local hospital emergency room while a mother wept at her inability to save her young. 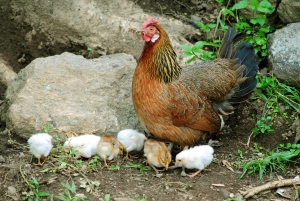 And so it is that Jesus today compares himself to a mother hen who will do whatever it takes to protect those baby chicks from the menacing fox.  Even to the point of giving his own life in the hope that they will be spared.  Like the hen who gathers her young under her outstretched wings…
For the hen is no match for the fox, not really.  And yet that is the way of the Gospel, isn’t it? It is the always the way of love and sacrifice over power and domination.  It is always courage over simple bravery.  It is always the willingness to stand up to, in the face of violence that threatens to take much that matters.
It is curious, though, that Jesus chooses the mother hen as his example and model.  I mean, hens are clumsy and messy.  They are not the majestic eagle, for instance, which are mentioned in other parts of scripture (Isaiah 40:28-31).   Why would Jesus choose the mother hen?
Perhaps it was just a handy image.  Maybe it was that then, as now, the hen was a frequent victim of the menacing fox and so the parallel simply worked.  And maybe it was something more.  For Jesus is spending his lifetime among those who have been marginalized by all sorts of debilitating illness.  Among those whose lives have been marked by failure and grief and loss of hope.  He has not been about hoarding his gifts for his own benefit, but about giving them away for the sake of a hurting world.  He is not ‘smart,’ like the fox, in the ways of the world, but he is ‘smart,’ or wise, in all the ways that matter.
And, in fact, as I poked around this week, I learned that chickens are also smart.  Apparently, they can anticipate and plan and that they are capable of worry.  To be sure, these discoveries have been made by those who believe that if a chicken is anticipating its own demise it may actually affect the quality of the taste of your dinner entree. Still, it has some bearing on our conversation today to know that “neuron organization in chicken brains is highly structured and suggests that, like humans, chickens evolved an impressive level of intelligence to help improve their survival.”  (see the link to Animal Planet for the whole story.)

So Jesus chooses the smart, self-sacrificing, chicken as his model.  And you and I are those little chicks who seem bent on ignoring the efforts of the one who would save us from all that would threaten.

And that is where the image finally comes home. We enter this story as that brood of chicks who are scattered, distracted, unable, somehow, to comprehend the very real danger which is threatening.  Jesus’ lament over Jerusalem is also over you and me and this world which all too often still refuses the gifts Jesus would so freely give, when all it would take for us to survive the attack of the fox would be for us to stand still and stand nearby.
So we gather in this season of Lent, knowing fully our need for repentance. And it would appear that our primary sin is what it has always been: our unwillingness to stand still in the presence of God: to simply submit to and receive and live into all the gifts God intends for us.
It shouldn’t be so hard, and yet it is for it seems I am always prone to think that I am enough, that I know better, that I can do better — or at least well enough on my own.
So today I find myself joining in Jesus’ lament over Jerusalem, not only for Jerusalem, but also for the community which I call home and for myself and all those I know who ‘are not willing’ as Jesus puts it today.  And I wonder what it would look like, how it might all change if I just take that first step and pause within this understanding and ask God to give me what it takes to simply stand still within his sacrificial protection, in his tender care.