I have survived some storms, of course.

I know you have as well.

I’ve weathered the sort of storms that inevitably come with living and I’ve watched the other kinds of storms roll in as well. The sort the disciples find themselves in the midst of in this week’s Gospel lesson.

It was August of 1991.  I was on Cape Cod with my sister, Martha, and my folks.  Martha and I had left them with our Aunt Elsie in Sandwich and we had driven to the end of the cape to Provincetown for a couple of days. 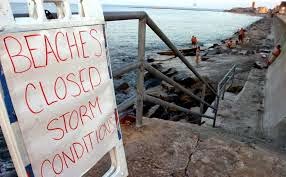 This was on the front edge of 24/7 cable news.  We knew nothing of the Weather Channel yet and frankly, even if we had, we weren’t paying attention.  I well remember standing at a pay phone talking to a friend back in Illinois who had been watching the news, however.  I remember distinctly the urgency in her voice when she told me a storm was coming.

So we quickly packed our bags and with thousands of other late summer vacationers we headed up
cape.  Even as we attempted to drive out of the way of Hurricane Bob, however, it was evident that others were traveling in the opposite direction.  The next morning’s paper showed some of those daredevils who ignored all the warnings and were photographed standing at the end of the pier at the end of the Cape with their arms outstretched, seemingly daring the force of the storm to take them down.

I didn’t get it then.  I still don’t.  And for that matter, I really don’t ‘get’ Peter in today’s Gospel reading.  I mean, who thinks they can walk on water?  We mere mortals are simply not made to walk on water.  We are bound by gravity and weight and natural forces of all sorts.

In fact, I learned this the hard way this summer.

I had climbed a ladder to clear out a clogged gutter.  It had to be done.  There was some urgency to the matter.  I was the only one to do it and so I leaned the extension ladder against the house and climbed up.

I was actually only a few feet off the ground when the ladder gave way.  Apparently it was not securely latched.  It clattered to the ground. So did I.  And I was fortunate to walk away with only some deep bruises. Only nearly two months later?  Those bruises — the ones you can’t see — are still healing.

This is what it is to be human.  We who are flesh and blood and bone?  We can’t fly without jet fuel and we can’t float standing up.

So this, perhaps, is why I have struggled so hard with this so very familiar story this week.  For you see, I just can’t quite believe that you and I are ever meant to walk on water.  At least not in this way.

And I’m not certain Peter was either.  In fact, notice with me that he seems to almost be testing Jesus when he says, “Lord, if it is you, command me to come to you on the water.”  Not unlike those daredevils who were tempting that hurricane so many years ago now.  Indeed, I can’t help but wonder if Jesus wasn’t smiling to himself as he told Peter to come on ahead.  Jesus had to have known that the storm swirling around Peter would eventually command his attention and that he would succumb to what one would have expected to have happened as soon as Peter’s feet hit the waves. It is only normal to be frightened in the face of such a storm.  It’s only human.   And human Peter surely was. But even more than that, of course: humans aren’t made to walk on water.

Indeed, so far as I can recall, never again in scripture do we hear about the followers of Jesus trying such a stunt.  No, they reserved their ‘walking on water’ for baptizing the searching and teaching the curious and preaching to the crowds and healing the sick.  Any and all of those would seem to be just as miraculous — although not in as self serving a way as Peter somehow strikes me today.

Maybe I’m wrong.  Maybe we who follow Jesus are meant to walk on water as Jesus did.  Or maybe, at least, it’s not a bad thing to try. As long as we remember when we sink to reach out in gratitude and joy to the one who with a hand can lift us up again.  Perhaps attempting to walk on water isn’t so bad — particularly if in doing so we take home the certainty that we, in fact, are not Jesus.

I don’t even do those things so well a whole lot of the time.  Which is why, when I do try and find myself sinking, I am grateful for the gentle scolding voice of Jesus as he grasps my hand and lifts me up and shakes his head at me.  Much as he did with Peter on that stormy sea so long ago.