I shook my head to see the ad — I expect you did, too. Apparently a major department store is now selling jeans encased in fake ‘mud’ — at a price of 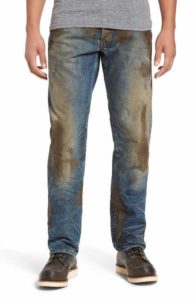 $425.  I shook my head to imagine that anyone, anywhere, would pay such a price to appear to be something they are not. And yet, I realize it happens all the time and the cost is nearly always a whole lot higher than that — if not in actual dollars, then in the price that is paid  in terms of integrity, authenticity, broken trust, or a simple sense of peace — both with those who seek to be what they are not and by those who are taken in by them. Thieves and bandits, Jesus calls them today and that they are. That they are.

And yet, while there are certainly those who embody what Jesus speaks of now, it is less them than all those other ‘false’ promises I think of now. Oh, they may be propagated by individuals, but they take on a life of their own: those things in the world which promise ‘abundant life’ but which, in the end, are false shepherds leading us to emptiness, destruction, or death of one kind or another.

You know of what I speak, I know you do. In fact, I can remember this being so from the time I was very young…

I was six, maybe seven years old and I was playing at a friend’s across the street. Her cousin came by to visit and they quickly let me know that there was no longer room for me there. With hurt feelings, I made my way home. I found my mother in the kitchen where I turned to her and said, “I wish we lived in Waukesha! I wish we lived where I had cousins to play with!”

She looked at me and shook her head. She tried to explain to my little girl’s mind that it would not be all it appeared. This would not make me happy. She went on to try to tell me that this way I would learn to make friends in a way I would not if I always had cousins to rely on. I didn’t really get it, then, for I was certain that daily access to such built in friends would make my life immeasurably better. Oh, and I imagine she was speaking, too, through her own sadness at having left so much behind. No, I didn’t get it then, and I still cannot help but wonder if my life would have been different. No doubt it would have been, but it likely would have been no better than what I had been given. Perhaps not even as good.

It is built into us, it seems, this yearning for ‘abundant life’ — however we may define it — and the wondering if an ‘easy’ fix would make it ours. Those ‘thieves and bandits’ keep making their promises and it is easy to fall under their spell. And no, those ‘promises’ do not hold less appeal, the older we grow. They just shift and move to meet us where we are.

As for me, these days, here are just a handful of those ‘promises’ which turn my head…

Your list will likely be different, of course. And these I name are small, I know, compared to many. I walk with those whose lives are marked by tragedy and struggle — job losses, health crises, strangling grief — and yes, I have been there, too, and expect I will be one day again.

In each and all of these instances and in so very many others I have yearned for other than what was, believing then all would be well. That life would be ‘abundant’ then. And while it was better, it was not, it is not what Jesus promises now.

Now it is so that part of us knows well the truth that Jesus speaks today. There is only one Shepherd whose promises are not false. There is only One who will give us all we need. There is only Jesus who is not only the gate to the sheepfold but the very Shepherd: the true source of life itself.

And so what for you and me today? How do we not let our heads and hearts be turned by all those ‘thieves and bandits,’ the pursuit of whose promises will only leave us empty in the end? How do we recognize the Shepherd as the source of the only life that matters? And how do we live like this is so?

Oh, I know it is a lifetime of determining how it is we recognize that voice and learn to heed it, but I expect that is the gift intended for us in John’s Gospel now. Young or old or in-between, we are meant to be no more and no less than those who are cared for by God and all those ‘thieves and bandits’ will not and cannot give us that. And yes, standing still in this truth brings the promise of the only life that matters. That abundant life which is accompanied by meaning and purpose and hope…

At any rate, this is where I am starting this week. I am standing still in these promises and keeping my eyes, my ears, my heart open to the gifts of the Shepherd. The only gifts that matter. And I expect that as I stand there everything changes — no doubt also for others who are seeking the source of these gifts as well.