Having a few days off this week, I decided to tackle some big tasks.  One of those was digging up the bushes in my back yard which didn’t survive the winter.
Now they looked mostly dead, but they weren’t entirely.  I expect this made job that much more difficult.  First, I trimmed them back so I could get a better look at the base.  Then I sawed off most of what stood above ground.  Then I began digging.  And digging.  And clipping off the roots where I could reach them.  And digging some more.  It wasn’t easy.  Indeed, I can’t recall how many times during this grueling task on a humid afternoon that I recalled my dad saying, “If you have the right tools, you can do anything.”  I’m not certain I had the right tools, but they proved adequate.  I had the strength, but just barely.  Even so, as I worked at it, I was gratified knowing that with hard work and perseverance, I could accomplish a lot.  Even this. 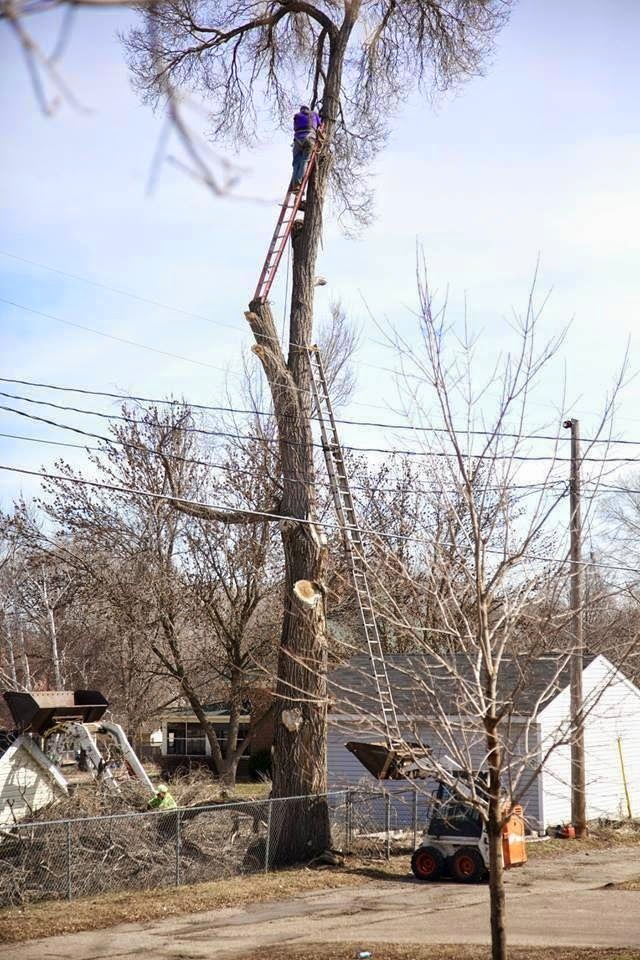 It was as the second shrub gave way that I found myself flat on my back looking up at the blue May sky.  It’s not a place I’ve found myself often since I was a child and still had such time to stare at the sky and look for shapes in the clouds.  Only?  I shouldn’t have been able to see the sky, for a large tree stands there.  Spring has come to us late this year, so perhaps it’s not surprising that it was only then I noticed that big old tree is not leafing out like it does most springs.  It is dying.  My heart sank with the certain realization that alone I surely don’t have the tools to take it down.  Unlike the character in the photograph opposite which was floating around social media this week — whose response to local law enforcement officers was that it was his land, his tree, and he’d cut it down any way he pleased (and yes, it is so that I’ve cleaned up the language here), I do know better.
Now of course it would be too utilitarian to say that the Holy Spirit is a ‘tool’ to help us overcome the challenges before us in this life.  And yet at the same time, it goes without saying that much of what we are called to that truly matters is far beyond what we can accomplish on our own.  All on my own, I don’t have the ‘tools’, the strength, the ingenuity, the passion, the imagination…  All on my own, I am never enough.
And so it is that the gifts of God are described for us in amazing ways in this week’s Pentecost story in Acts.  As I stood within these familiar words this time around, I found myself overwhelmed by the breadth and depth and height of what is described.  Indeed, I paused briefly in the other lessons for this Festival Day, and I found myself returning to the marvelous story before us now.  For it is something, isn’t it, to think of those disciples, described now as still together in one place — in one house, in fact?  I mean, do you suppose that in spite of all those times Jesus had appeared to them in those last forty days, that they are still huddled together in fear?  And then we hear there is a violent wind inside the house and there are tongues of fire and suddenly they are speaking in languages  — or at least being understood in languages they have never spoken before.  Next it appears those disciples have moved outdoors and are within the hearing of others who are ‘amazed and astonished’ because they can actually understand them.  Indeed, pretty soon we are told that those disciples are heard and understood in languages across time and space. And then through Peter, the ancient promises of God become new again in the hearing of those who perhaps have not yet received these powerful words before.

Beyond the wind and fire though (which are quite something to imagine), I find it especially interesting that the power of the Spirit is known most profoundly in the wonder that people who just moments before had no understanding of one another now do.  In the culture I call home, we may well tend to believe that the gifts of God help ME to be and do more all on my own. (It is evident, for instance, that the man in the photo above is thinking that.  He certainly has ingenuity and courage… but one wonders at his need to take on a monumental task like this all on his own.) No, instead, the gifts of God which are ours in the Holy Spirit are ones which bring us together with those we perhaps have only begun to understand. This gift of the Holy Spirit as described today is only experienced by people who are together: in long standing community or in community which has just suddenly been formed as we see in this story.  And then somehow God builds upon that first gift to begin to change the world.

So flat on my back on a warm day in May it came home to me that all alone I am not, I do not have, enough.  I simply do not have the tools, the strength, the experience to do what needs to be done and so this week I’ll call around and find someone else who does.  There is, in fact, a whole community surrounding me which is full of folks who are good at things I am not.

In the same way, God puts us together on this journey of faith.  All on our own we do not, but all together we have ‘the right tools’ to do what needs to be done — whatever that may be.   Perhaps the most amazing thing God does in this story in Acts is to break down that which divides us from one another so that we can see that this is so.  Oh yes, the Power of the Holy Spirit is not really to be found in the wind and the flames which only seem to foretell the amazing events yet to come.  The Power of the Spirit is discovered between us and among us and through us.  It all begins with understanding one another.  And anything is possible after that!