I closed myself in my office this afternoon, hoping to get some writing done.

A few minutes before when I got home from running errands, I threw the windows wide open. I did so partly because this is one of the first warm days of spring for us here, and it just felt good.  I also did so because I thought it might distract my cat, Shadow.  She loves to sit in an open window.  And if I don’t distract Shadow, more often than not she is vying for my attention. Cat owners everywhere know this to be true: a cat wanting your attention can make writing, or anything else requiring energy and attention, difficult. 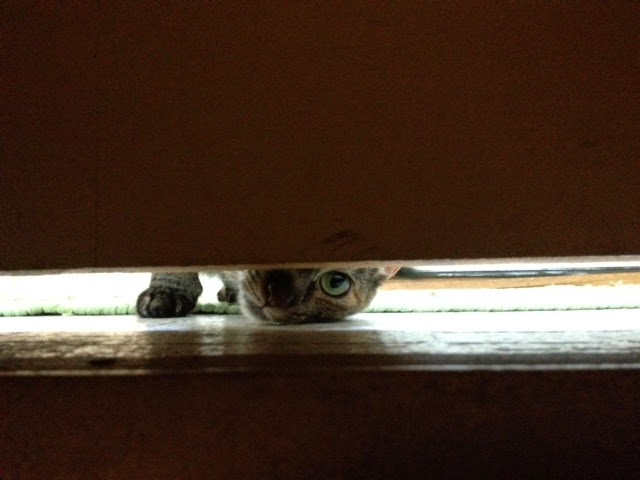 It didn’t work.  Oh, as I said, I closed the door and made sure it latched behind me, but before long I could hear her on the other side.  She meowed and meowed.   Then she began to throw herself against the door to get to me.   This is how it often is. I am away from home a lot.  When I am home, she stays as close as possible. (In the picture here, you can see Shadow keeping an eye on me through the gap at the bottom of the door when I went to the basement today.)

After a few minutes, I  gave up.  I pulled a book off my shelf and carried it into my bedroom and stretched out to read awhile.  Happily, Shadow curled up next to me and fell asleep. Somehow this time it was enough to just be nearby. I gave up, you see, because my bedroom door bears scars from another such standoff. That time she did not simply throw herself against the door. She tried to chew her way through it.

Gates and doors, of course, are for precisely this.  They stand as barriers.  Oh, they often serve as protection, of course, but they can also be obstacles which keep us apart from one another. Sometimes I would rather do nothing other than give my cat all of my attention. Sometimes I have other matters calling me. Sometimes my door stands open to the world. Sometimes it is latched shut out of fear, wisdom, or a need for privacy or a little time alone to recharge. Gates and doors are for this. They stand as boundaries, offer protection, delineate an inside from the outside, and yes, they divide insiders from outsiders.

I grew up in a time and place when doors surely marked boundaries, but we were not so afraid of others inappropriately crossing them. Some of you may also recall a time like this: we often simply did not lock the doors when I was growing up. When we finally did, my dad hung a key in the garage where anyone could easily find it — just in case we inadvertently locked ourselves out.  In the town I now call home, those who have lived here awhile can remember to the day and hour when they started locking the doors. It was the late 1950’s.  A little girl was abducted when playing outside after supper with a friend.  Her body was found miles away several months later.  The case was not solved until just last year.  The world was not as safe after that.  And ever since, people have closed the gate, locked their doors, and lived in a kind of fear some can remember not feeling.

Gates and doors are for precisely this. They provide protection and shelter.  They are the means for going in and going out.

It is interesting today that Jesus, our good shepherd, does not describe himself as the gatekeeper necessarily, but rather as the gate itself.  You and I who find ourselves so far away from what it was to shepherd in the time of Jesus might think something got lost in translation here in John’s Gospel. It turns out that is not the case.  Jesus calls himself the gate, because that was part of what a shepherd was. In sheep-folds where there was no actual physical gate, the shepherd would lie himself down in the opening which allowed entry and exit. In this way the shepherd knew who or what came and went or who or what attempted to come and go and so could serve as protector of the sheep.

It is telling, I expect, that we hear about no door which separates the sheep from Jesus since he is the gate, the door itself.  Unlike my poor cat, none of us needs to beg to be let in — none of us needs to throw ourselves against the door or chew our way through to find entry.  Jesus the gate and the gate-keeper opens and closes the way for us.  Letting us in.  Letting us out.  Keeping us safe.  And giving us all we need.

And so I find myself wondering now just how my life would be different if I lived believing and trusting that was all I needed.  Like a sheep who knows it needs its shepherd and that is enough.  Indeed, I wonder how it would be for you and for me, if something like my cat, Shadow, it was enough on a Saturday afternoon to just lie down and rest in the presence of Jesus.