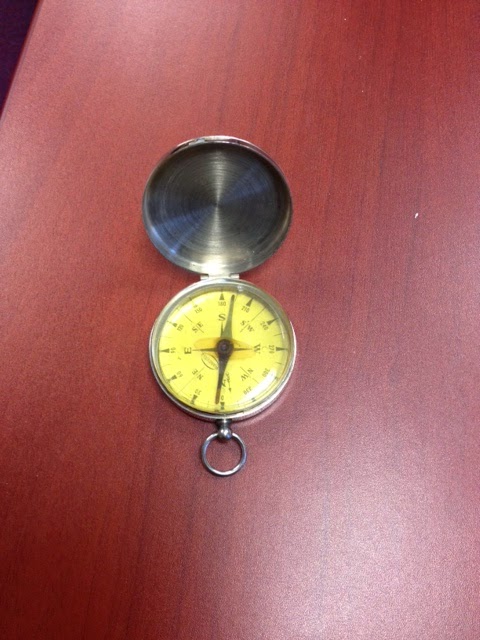 I came across my dad’s old compass a few weeks back. It was in a plastic bag nestled in a trunk which holds pretty much all the stuff of his that we have held on to. The trunk has been in a closet at my mother’s home and it was only as we were emptying out her house, that I had reason to come upon it again.  I couldn’t resist taking a look.  When I pushed the lid open, I was overcome by the smell of leather and wool….him.  And I found myself pushed back on my heels, blinking back tears. It will have been eighteen years this January and we do still miss him so.

As for the compass.  It is silver and worn smooth by time and human hands — his, I’m certain of this.  It’s a nautical compass which was made in Germany.  Probably he got it when he served in the Navy during the Korean Conflict.  Although, he grew up on the Atlantic Ocean, so maybe he picked it up before that.  There is, of course, no way of knowing now.

At first I closed up the trunk and latched it.  But half an hour later I went back and pulled out that compass and slipped it into my pocket. It’s a piece of him, of course, but so much more. It speaks to a basic human yearning for points and places to ground us — and for a sense of direction.  I think, now, of him, of course, and what gave his life boundaries and meaning and direction.  And I think of all of us and wonder about where our sense of direction comes from, too.

As I settled into this week’s Gospel lesson from Mark, I found myself reading beyond just the baptism of Jesus and here is what I noted.  The first chapter of this shortest Gospel is chock full of activity.  Now, of course, it could be the evangelist’s perspective and his own felt need to get to Holy Week as quickly as possible. Either way, as we hear it in Matthew and Luke, too, immediately after his baptism, Jesus spends forty days in the wilderness (which here take up all of two verses).  Right after that we hear about Jesus’ preaching and calling disciples and teaching and healing, and healing and healing.  Before the end of this first chapter, we already hear about Jesus’ need to retreat from it all — where Simon and his companions ‘hunt him down’ and then again, we hear he is out preaching and healing.  And so I wonder now, what is it in these verses before us this week which receive more attention than anything else that comes after in this first chapter — what is it that gives Jesus this clear sense of direction as to where he is called to be and what he is called to do next?  Because he certainly seem s to move forward with a real sense of purpose.

The clues are few, it seems.  We don’t hear what compels Jesus to go to John to be baptized.  Perhaps it was simply that John’s message of repentance rang true in terms of the new life it pointed to.  And John, of course, is pointing to the coming of Jesus so it’s only fitting that they meet up.  Either way, there is a certain humility exhibited here as Jesus submits to John’s baptism.  Whatever it was that brought Jesus to the Jordan River, we do know this: the boundary between heaven and earth was rent wide open.  We hear about the Spirit moving then and a voice addressing Jesus:

“You are my Son, the Beloved; with you I am well pleased.”

And no, of course we don’t hear what it was that was so pleasing about Jesus.  Perhaps it was the very humility he shows today.  Or maybe it was the Spirit knowing the truth that even then Jesus was bending himself to God’s will. Mark’s Gospel doesn’t really offer us anything more except this truth that from here on out that boundary between heaven and earth continues to be torn wide open in Jesus’ preaching and healing, teaching and calling.

And it could be that the sound of God’s voice in his ear telling him who he was, and that he was uniquely loved and pleasing to God — it could be that was enough to get him moving in the right direction.

Perhaps it would be the same for all of us.  Indeed, it was so very long ago now, but I can remember as a young teenager sitting at my dad’s feet.  My back was to him as I sat quietly — perhaps the television was on, maybe I was reading a book.  Out of the blue he reached down and touched my head and said softly, ‘You are my beloved child… with you I am well pleased.”  Such sentiment was not necessarily like him.  And yes, of course, he was speaking words he had heard every time the Baptism of Our Lord rolled around again. I have never forgotten the love in his voice though.  Or the sense of belonging and confidence those words instilled.  And if this so from an earthly father?  How much more so if we can imagine the voice of God speaking these words to us as well?

For while none of us are Jesus, we are, of course, all of us still God’s children. Each one uniquely loved. And yes, God is pleased with us as well as we bend ourselves to God’s will: seeking as Jesus did to be hands of healing and hope for a hurting world.

We don’t need an earthly compass for this. The voice of God in our ear is enough for through these words we, too, are reminded of who we are and that we are called to something more as Jesus was: wherever we may find ourselves.  And I for one, can’t help but wonder if that boundary between heaven and earth wouldn’t keep on being torn wide open if we only were to listen to that voice and believe it and live like it were so. What do you think?