One could say it was a children’s sermon gone wrong. 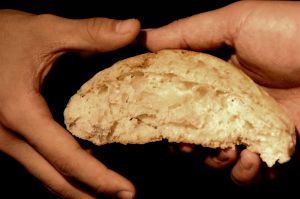 A few Sundays ago as we were talking about Jesus feeding the 5000 we did an ‘experiment.’  I had the end of a loaf of sourdough bread left from baking on Friday and we decided to pass this piece of bread among those gathered for worship that day.  I broke it into three pieces and then sent three youngsters out into the congregation with it: one small piece for the right side, one for the left side and one for the balcony. As the people passed it from one to another, they were invited to take a piece for themselves.

It took a while for those bits of bread to make their way up and down the pews… and as for the balcony?  Well, in the congregation I now serve it’s a far distance from where I stand — so I couldn’t really tell how it was progressing there until laughter started rippling down.  I looked up and asked what had happened. Several shouted out that they would tell me later. Still, it was clear that something had happened to their portion of bread.  So having a little left from one of those which had made its way through the main floor, someone ran upstairs with it and everyone in the place wound up getting a piece of bread. A small piece, to be sure, but still at least a few crumbs.

I followed up later with the balcony crowd and learned that there was a three-year-old accompanying his grandma at worship on Sunday. When the bread came to him, he popped the whole piece into his mouth!

Bread is for eating, of course, and this youngster knew it.  He simply received it and did what he knew to do with it…

It is also so with the bread that is Jesus — this living bread which comes to us from God’s own hand. promises life.  It is ours to receive, to enjoy, to celebrate, to give thanks for.  And like all bread, it is meant to feed us.

I was on call at our local community hospital a few weeks back.  It was mid-morning on Thursday when my cell phone rang.  It was the hospital social worker calling to tell me she was with a family whose 90-year-old mother was dying and they had asked for pastoral care.  It wasn’t urgent, she assured me, but hospice had been called in.  Then almost as an afterthought she said, “The language shouldn’t be a barrier.  Her children know enough English so that you should be fine.”

My high school Spanish is paltry.  Still, I did understand when Carmella’s daughter leaned over and told her mother “La pastora aqui.”  The pastor, a female pastor at that, is here…

And so we gathered round Carmella’s bed and with my hand on her forehead I prayed.  It was in the next moments that one of Carmella’s sons turned to me and asked if I would bring them communion.  “Of course,” I said.  And I drove back to church and refilled my communion kit with plenty of wafers.  I loaded up the little plastic glasses just in case, although as I expected, their practice was to receive only the bread.

I returned within the hour and by then most of the family had gathered — crowded around the bed of their mother and grandmother….  I repeated the story we hold in common, “In the night in which he was betrayed, our Lord Jesus took bread…” I wish I could have said it in Spanish…even so, they nodded as I repeated the words they clearly knew so very well.  We bowed our heads and prayed as one our Lord’s Prayer and then I circled the room and pressed the tiny wafer into the hungering hands of a grieving family. And yes, since they asked me to, I gave a bit of wafer to Carmella, too.  Did she realize then the gift that hers was to receive once more in this life?  I’m told the dying comprehend more than we often give them credit for and so I expect she did know.  I know it was great comfort to her children that together with her family she might have one more taste of the Living Bread that is Jesus.

And so it is we hear of Jesus as Living Bread again this week. I know there are a thousand, thousand ways to encounter Jesus and I know also that the story I just told is probably an example of how we who are deeply churched most expect to encounter him.

Only I didn’t expect it in quite this way when I walked in to that hospital room that morning.  I didn’t expect it would be shared across so much which would otherwise separate us: language, culture, and faith traditions, to name a few.  And I certainly didn’t expect they would be so eager to receive this bit of Living Bread even from me…   So in this once more I am reminded of how this Bread that is Jesus brings life also in surprising places and between unexpected people: binding us together across all that would separate us.  And I am reminded again that this gift of God IS ours to receive, to celebrate, in the simple example of one small child in the congregation I now serve — this gift of God is ours to eat, to take into ourselves, to change us from the inside out, giving us life and energy and hope for another day. Like the bread we enjoy every day, this Bread does the same only more for receiving this Bread has us abiding with Jesus who is the source of life and hope itself.