My dad grew up in a quaint, historic town in Massachusetts. It is one where the dates in the graveyard date bac 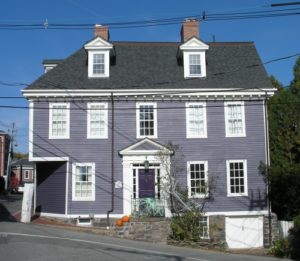 k to before the Revolutionary War and as a result, t is a place where it seems history is literally to be discovered around every corner. It has been years since I visited Marblehead, but as I sat with the urgency of this week’s lessons, I was reminded of a story about making paths straight. For you see, this is not a town where the streets are laid out on a grid. Rather they wind up and down and around, paving having simply replaced the muddy rocky paths which horses and carts once navigated. Specifically, this is what I recalled: the story behind the house pictured here.

For look closely and you will see that the left front corner has been cut out. Now it is likely that this accommodation was made when it was discovered that it would be easier for coal wagons to make their way down this street without that corner. Another theory goes that removing it made the flow easier for water and sewage. However,the story that has stuck is this: In 1824 General Marquis de LaFayette came to visit. He was met at the harbor and was given a tour of the town in a carriage pulled by six white horses. Now this particular house sits at the corner of five converging streets. It was a rainy day and the mud alone made it hard for the horses to navigate. They could not make the turn and so legend has it that someone took an ax and started chopping away at the corner of this house, making it possible for the General to pass. And to this day this is known as The Lafayette House.

Now all logic would argue the veracity of this story. And yet, true or not, it brings to mind the urgent exhortation of John today, doesn’t it? 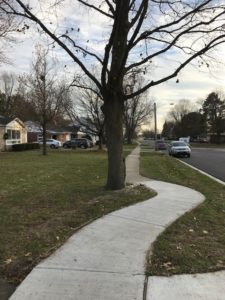 And yet, most of the time we don’t think this way, do we? In fact, an actual living illustration of this can be found right on my own street. It must have been whenever it was that they first installed sidewalks that it was decided to put the pavement down in such a way that it would avoid a tree which had already been planted there. (Indeed, when does that happen? It seems to me someone at the time must have had significant influence to convince the city to not take out the tree altogether.) And while I appreciate the good intent of this decision for one cannot have too many trees on Meadow Lane, it is so that one must be alert on one’s predawn or after dark walk; one must remember this jog in the sidewalk, because to forget can have painful consequences. And yes, I speak from experience, having more than once nearly walked right into that tree which one might not expect to be there in a community where streets and sidewalks normally run straight.

So yes, it is “straight paths” we are called to make today as we “prepare the way.” And oh, isn’t this surely one of the goals of these short weeks in Advent as the church year calls us to consider once more the coming of Jesus? Isn’t it time even now for us to wonder what it is to prepare a way that we might be be part of shaping a world where, in the words of 2 Peter, Righteousness is at Home?

Indeed, to go back to my earlier image, perhaps those other possible reasons for cutting off the corner of a house fit even better with the call of John today as a way of ‘straightening the path’ for an honored guest.  For isn’t ‘preparing a way’ for the royalty who is Jesus done

Oh, it is so that we are called to ‘prepare a way’ in our own hearts, but isn’t it also so that we would want Jesus to find a way into and to be at ‘home’ in this whole wide world? And might preparing in one way also help us to do so in the other way? Might action lead to contemplation and contemplation lead to action both? Might my making the world ‘ready’ help to make myself ready and might making myself ready lead to my making the world ready as well?