I came home for supper this last Wednesday night. It was Ash Wednesday, and the day had already been full. I had preached at our noon service and so I figured I had a little more time before heading back for evening worship. The sermon was ‘tested’ already and would not need revision. Or so I thought.

For halfway through dinner, a sheriff from Florida held a press conference. I knew there had been another 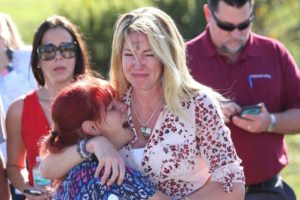 school shooting. Until that moment, along with the rest of the world, I did not know the extent of the loss of life. Seventeen were dead.

I did up the dishes and headed back to church early. I sat at my desk for the next 45 minutes — half that time just holding my head in my hands — trying to see this entirely preventable tragedy through God’s eyes.

And a few minutes later, with voice shaking, I preached.  On Ash Wednesday I spoke of God’s broken heart. And of our broken hearts. I spoke of my own sin of remaining too silent. And I spoke of repentance — of returning to God — as calling for us to speak up, to do something. For we are called to love who and what God loves. Always. And as a nation, as communities, we are falling far short.

It comes to me now that the wisdom of our Gospel lesson for this Sunday speaks to this as well. That perhaps addressing those things which are scourges on our communities may be a whole lot like picking up our crosses as Jesus calls us to today. And so here is how I have been thinking about this in these last day, especially in light of some reading I am doing now…

At the urging of a colleague, I am digging into a little book by  Alexander Shmermann entitled For the Life of the World. Published in 1963, his wisdom seems all the more relevant today. In essence, his thesis is this: that we were, we are, created to be priests — mediators — between God’s good creation and God. This is how he articulates our role in this way:

He (sic) stands at the center of the world and unifies it in his act of blessing God, of both receiving the world from God and offering it to God — and by filling the world with this eucharist, he transforms his life, the one that he receives from the world into life in God, into communion with him. (p. 15)

When we see the world as an end in itself, everything becomes itself a value and consequently loses its value, because only in God is found the meaning (value) of everything, and the world is only meaningful when it is the “sacrament” of God’s presence. Things treated merely as things in themselves destroy themselves because only in God have they any life… Man (sic) lost the eucharistic life, he lost the life of life itself, the power to transform it into Life. He ceased to be the priest of the world and became its slave.” (p. 17)

We ceased to be priest of the world and became its slaves.

Indeed, though like the children of Abraham I am likely to claim that “I have never been slave to anyone,” I know that this is not true, of course.  And so it is that I am considering the truth that even as Jesus urges us to “take up our crosses,” he is inviting us to pick up the instruments of our own deaths and in the act of doing so, to put to death all that enslaves us.

For I am thinking these days about how enslaved we are — all of us — to fear. To fear of losing what power we have or the fear of never getting the power for which we yearn. To fear of losing our economic or physical or emotional security — or never experiencing it at all. And oh, I am considering this today especially as the news cycle plays over and over again video of children fleeing for their lives and the still photographs of those who did not make it out alive again this time — some now frozen in time as heroes for having shielded their students from flying bullets with their very bodies.

And oh, I think about how fear threatens especially here:

But let me tell you who is no longer afraid. Parents who have buried children far too young who have died at the hands of gun violence. I cannot help but believe that this is, at least in part, because they have already ‘picked up their crosses’ and stepped into the worst that life this side of heaven can offer and having ‘survived.’ As a terribly painful result, they have a clear idea of what matters and what doesn’t. That what they were afraid of before no longer threatens — or at least can’t do any more harm than what has already been done. Indeed, I see it now in the young people, too, who survived hails of bullets this week and have lived to tell the rest of us what matters most.

If we haven’t experienced this for ourselves, we would do well, it seems to me, to be in deep communion and conversation with such as these. Oh, they had no real option but to ‘pick up their crosses’ and go down a path they would never have chosen. Even so, they have done so and are now, many times, free from the fear that paralyzes.  I say this knowing, of course, that this is certainly not a perfect parallel, for Jesus offers now a path for our choosing, not one we are forced to take…

And what deep privilege it is that again today you and I are invited to consciously, intentionally give up that which we thought mattered most and somehow find new life in the freedom that offers. That we can walk into that which frightens us most of all and in doing so, somehow be set free from that fear. So maybe it simply begins with this. Maybe it begins with willfully if not entirely willingly picking up that which scares us most of all. Facing it head on. And in doing so, daring it to be more important to me, to you, than life with God. For in the end it will not be, it cannot be, this I know…

At least that is where I am landing now as I look out at the world you and I are called to live in. For it is into this world that Jesus calls us to pick up our crosses. Into this world now.