“…and there will be dreadful portents and great signs from heaven…”

I got up extra early this morning to walk.

I wanted to catch sight of the lunar eclipse which we will not witness again for another three years.

When I first stepped out my front door, I couldn’t see it at all, hidden as it was behind the rooftops of my neighbors.  Halfway up the block, though, my sightline cleared and there it was, barely visible of course as the earth was then almost completely blocking the sun’s reflection on the moon.

For the next half hour my back was to it, but for the last stretch of my walk toward home I could see the brightness of the moon increasing as the earth continued to move in 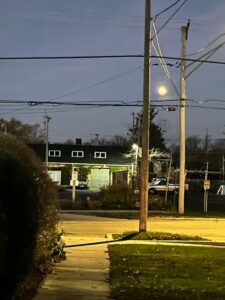 its orbit. I stopped once or twice to capture it with my camera, but as you can see, this image doesn’t begin to reflect the beauty of what I saw, but perhaps you get an idea:

As I walked with that beautiful sight peeking out between utility poles and over housetops, I found myself considering the words of Jesus today and I stood still in this for a while. In a time long before the one you and I inhabit, something as easily understood to you and me as a lunar eclipse would have been a sign of something catastrophic to those living in a pre-scientific age, much like the ‘dreadful portents and great signs from heaven’ in Jesus’ preaching now. To be sure, it likely would have caused hearts to seize in fear and wonder at what it meant. Indeed, I am grateful to live in this time when such as this is easily explained. And yet, I expect we are missing something, something vitally important even, when we because can so easily understand something with our minds, we may miss the larger picture altogether.  The one that Jesus is pointing to in his preaching now. The one which leans deep into the truth that something bigger is at play in the large and small things we encounter every day. And that the hand of God somehow holds it all, the good and the bad alike. And for us this. That when we find ourselves in such calamitous times, God’s presence will be most palpable in that where we had been speechless, we will be given words to speak and a wisdom to hold us.

Now I know there are those who are inclined to lay these words of Jesus alongside the news of the day and I know it is increasingly easy to draw the parallels between what Jesus spoke and what we see every day. Indeed, ‘wars and insurrections’ are part of our daily vocabulary and deep understanding in a way that perhaps they were not even a few years ago. As for earthquakes and famines and plagues? We all know the terror these strike within us, not because they are imagined, but because we have experienced them, at least in part. As a result, I cannot decide if such as these frighten me more or less than they did when I was small when they only lived in pictures painted in my mind because of words like these on a page. But I expect that was only because I was long protected, privileged even, by the place and circumstance of my birth. For all of time, other small ones have known the terrors of war, of famine, of disease, of natural disaster long before they became real to me.

So once again this week, the debate bubbles up as to the meaning of Jesus’ words. And it is true that I find myself wondering once more how it is we even can hear them as prediction when for all of history it seems, what Jesus speaks of now has been part of the human experience. And while the day may come (and climate change activists are likely right about this) when it will all ultimately come crashing down, at least for this hour, on this coming Sunday, I expect I will be standing still in the promises Jesus makes to those of us who find ourselves in such times already:

For depending on where you serve, I expect everyone who gathers now has some sense (perhaps made deeper than ever by recent experience) of what Jesus describes today. And this being so, at least some have some awareness of the powerful gifts of God which come and will always come in such times. My prayer is that this has been so for you and that you might be especially sustained by the promises given and received today.