I didn’t get up in time to go to my weight training class this morning.  It’s the day after Easter, after all, and my 4:45 alarm just came too early.  So instead I decided to take the walk I’ve been fitting in these last couple of weeks.  It takes just more than half an hour to make the circle and while it’s not my usual summer walk it’s been just right on these mornings when spring is making a late start.  I altered my route by a block or so though today as I remembered that even as cold as it has been, the crocuses must be up by now. 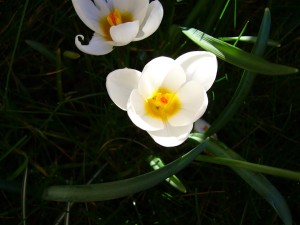 For you see, there’s a house about a block from where I live where the crocuses bloom every spring.  They’re not in an actual garden set

apart. Rather, the green shoots and the bright white blossoms poke their way through the grass all over the front lawn.  I remember what a precious surprise it was the first time I happened upon them.  Now I go looking for them early in the spring.  I go because I’ve seen them before.  I go because even when there there is no other evidence of life just yet, I know they’ll come again. They always do.

It was as I made my way down the street towards those promised crocuses that I came upon another surprise this time.  Yesterday was Easter after all and apparently some youngsters had gotten sidewalk chalk in their Easter Baskets this year ans so for anyone passing by we were treated with a whole length of sidewalk drawings. First there was a hopscotch pattern traced in purple chalk. And then there was in large capital letters HAPPY EASTER!!! for all to see.  And then there was another hopscotch game sketched out this time in bright orange chalk.  By then I couldn’t resist.  I glanced over my shoulder to be sure no one else was out and about and I skipped my way through the last several squares.

I found I wondered though as I continued on my walk about how those children learned about hopscotch.  In this age of smart phone apps and video games and mostly organized sports, somehow children still learn to draw hopscotch on the sidewalk and to jump through the squares. Someone must have taught them.  Someone must have passed along the joy we can know in such a simple game.

And then I walked a little further and found the crocuses where I knew they would be before I made my way home to get moving into another day.  And yes, in case you’re wondering my Monday morning after a busy Holy Week meanderings do somehow tie to this week’s Gospel story…

For it is so that we meet up with Thomas once more.  And I have to say that yet again this year I find myself empathizing with his unwillingness to embrace the news of Jesus’ resurrection until he had seen the evidence.  I am certain I am no different from him.  If I hadn’t seen those crocuses every spring for the last five years I surely would not have gone looking for them today.  And that is only spring flowers.  Anyone who has experienced the cycle of the seasons even just a few times knows to look for flowers which will come again.  But in the case of Jesus’  being alive again?  What in all of his life experience could have prepared Thomas for that?

Except, of course the stories of such remarkable things which had happened over and over before throughout the history of God’s people.  Indeed, as I experienced our Easter Vigil service on Saturday night I found myself leaning back into my pew and settling into the long familiar ancient stories once more. The Story of Creation.  Of Noah and the Flood.  Of the Parting of the Red Sea.  Of the Valley of Dry Bones Coming to Life Again.   I have never seen these things, just as Thomas had not seen these things.  It may be a stretch, but it reminds me of all children in all times and places to whom gifts are passed along: in small things like learning to draw and play hopscotch and in large things, too,  like stories of a people and our God and what it is to live as those who know that death did not defeat Jesus and so does not stand a chance with us either.  In part we know this is so because we have been told that God has been doing the unexpected, the impossible, the life altering, death defeating for all of time.  To be sure, Thomas had also heard all the stories from his youth.  One wonders why the rumor that Jesus, too, was alive again would come as a surprise.

It could be that Thomas was blinded by grief, by long learned cynicism, by exhaustion, by fear…  But even if that wasn’t the case, I suppose one can’t really blame him for asking for the evidence.  The other disciples had had as much as he asked for before they believed.  They had seen the Risen Christ. Thomas only demanded the same.  And maybe, just maybe, his knowing the ancient stories enabled him to finally fully believe after all.  For you’ll notice that for all of his insistence, he never did place his finger into the mark of the nails or his hand into Jesus’ side and yet he still believed.

And so I would offer one more marvelous image from these last special days.  Yesterday morning a hardy group of the faithful bundled up against the lingering cold of this late coming spring and gathered at the cemetery. As part of our service we joined together in naming the names of those we have loved and buried there and in other such places near and far. And we repeated the Easter Proclamation over and over as the names were named.  “Alleluia!  Christ is Risen!  He is Risen, Indeed!  Alleluia!”   We were midway through this sharing when one of our 90-year-olds who was sitting on a folding chair in the front row hoisted himself to his feet and bracing himself on his cane he announced to one and all:  “I forgot my hearing aids!  I forgot my gloves!  I forgot my money!  But I’m having a great time!”  And then he sat down.  And I said, “Alleluia! Christ is Risen!”  And the people responded, “He is Risen, Indeed!  Alleluia!”  The wonder was that apparently Jesse had not been able to hear a word we were saying, and yet somehow he knew himself to be fully part of our celebration.  It had to be my favorite moment of the day.  Indeed, Jesus concludes his exchange today with Thomas saying, “Have you believed because you have seen me?  Blessed are those who have not seen and yet have come to believe.”  He’s talking about all of us there… you and me who gather in cemeteries still.  You and I who can no longer hear and maybe have never seen, but still somehow believe. By God’s grace and gift in the company of all of God’s people in all times and places along with Thomas who no longer doubts but believes, you and I also believe and encounter Easter Joy once more in long awaited crocuses joyous sidewalk greetings and beside one another we repeat the promise that Christ is Risen. And so shall we be. So shall we be…