Whenever Jesus starts feeding people — or for that matter, anywhere people are fed in the Bible — we always hear a story of abundance, of unexpected gifts, of needs being met to satisfaction, even if it’s not fancy.

This is, of course, the case in Matthew’s Gospel as it is in the other Gospels which recount similar stories. And in this case, as in the others, there was more left over than when they started!

And so this week I have had my eyes and heart open for stories of unexpected abundance — times and places where the ordinary things of this life (like five loaves and two fish) do more good than we can imagine when first they are blessed and broken and shared. I offer a couple of those stories here:

Several months ago I began serving on the board of Hope Haven, our local homeless shelter. For decades this organization has provided emergency housing for the homeless. In more recent years we have come to the understanding that many who are homeless also suffer from mental illness and so need specialized kind of help. In fact, one of our units is long term housing for people who simply would not be able to function in the world without this support. Of late, the director has been putting more and more energy into addressing the root causes of homelessness — particularly with the children — trying to break the cycle for this next generation. Sadly, it is not surprising that many of these young people have been the victims of one kind of trauma or another, too often sexual abuse.

Now, as I have learned, it is not uncommon for a victim of abuse to ‘disassociate’ during the abuse — a coping technique which then spills into other parts of their lives as well. In other words, they are simply not ‘present.’ While this may be almost necessary when one is being abused, it can be harmful in the rest of one’s life, leading to all kinds of negative, even life and spirit threatening consequences. And so Hope Haven now has ‘trauma groups’ where healing is begun and abundance experienced — in perhaps most unlikely places. In fact, for the last couple of years they have taken these young people camping for by being put in physically demanding situations where they can be assured they are safe, they learn to be ‘present’ — connecting with their bodies again: a skill which spills over into the rest of their lives. 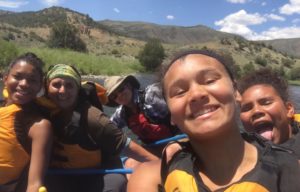 In fact, a few weeks ago, in order to give them even more practice at ‘connecting,’ a group of eleven teenagers from Hope Haven went on a trip to Colorado where where along with their adult coaches/therapists/chaperones, they climbed the side of a mountain, went white water rafting, jumped off a cliff into a lake, went horseback riding, prepared meals in the rain, and had their breath taken away by mountain air. Last week I sat next to four of these young women at a board meeting and witnessed their joy as they told stories about this recent experience. We also heard them speak about their own individual journeys to healing from horrific places of pain.

And I couldn’t help but think of the Abundance we hear about in today’s Gospel.  For yes, some of the gifts these young people are receiving are specialized and far too rare — like the training and gifts of the counselors who have been working with them. At the same time? Kind and listening ears, patient and open hearts, the ordinary words used to tell stories and receive them, and yes, the simple act of being forced to stay present to put one foot ahead of another climbing the side of a mountain — these at first seem small and perhaps sometimes, not even all that effective. But what we saw first hand as we watched and listened a few days ago is that when even our simple gifts are shared with generosity and joy there is always more left over than when we started. When the “bread” is blessed and broken and passed around? There is more than enough.

Another example, one many of you have seen and heard me rejoicing over in these last months:

Six months ago or so the congregation I serve was gifted with a house. The one who gave it no longer had need of it and wanted it to go to good use. And so we received it with joy for we were preparing for the arrival of an intern pastor who would need housing. 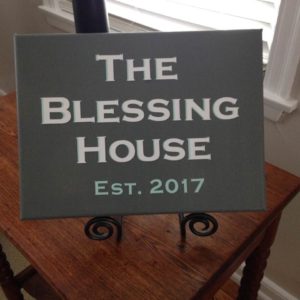 Now the house was solid, but it hadn’t been updated in quite some time. On a first walk through one could easily become overwhelmed by all that had to be done. Indeed, one might have even shared the skepticism of the disciples in Matthew’s Gospel when they wondered how all those people would be fed with so little. But here is what happened: The word got out and people were invited to join in and one after another gifts were shared. A team was put together to oversee the project. Right away some hard working folks started showing up and cleaning it out. Pretty soon one offered his services as an electrician and another as a plumber and another put down the new floor in the kitchen and bathrooms and yet another — this one an 80 year old retired mason managed to shore up the sagging foundation on the garage. A friend of another offered to re-side the garage free of charge. People started sharing gifts so that the appliances could be replaced and a young couple went to work refinishing the hardwood floors. More people than I know picked up paintbrushes and went to work and two people who were formerly strangers to one another worked together to put up the back-splash in the kitchen. The list goes on and on as more than eighty people had a hand in making this house new for its next occupants. Our council president will tell you that everyone who was asked said ‘Yes’ if they possibly could. And the result is breathtaking. And yes, there are more than twelve baskets full left over — not only in the visible end result but also in the joy of those who had a hand in this and the relationships formed or deepened between and among those who worked together! Indeed, we have called it “The Blessing House” — drawing upon the inspiration from Genesis 12:2 where Abram and Sarai were ‘blessed to be a blessing’ for so we are. So we are.  For again, when the “bread” is blessed and broken and passed around, there is more than enough!

In both the examples I offer above one could easily have been tempted to give up or to think it was too late or that there was simply not enough. But once everyone was “served” — once we had a chance to look back on what was experienced?  Like the disciples so long ago, we, too, discovered that we had more left over than when we started. And isn’t that always a wonder to behold!