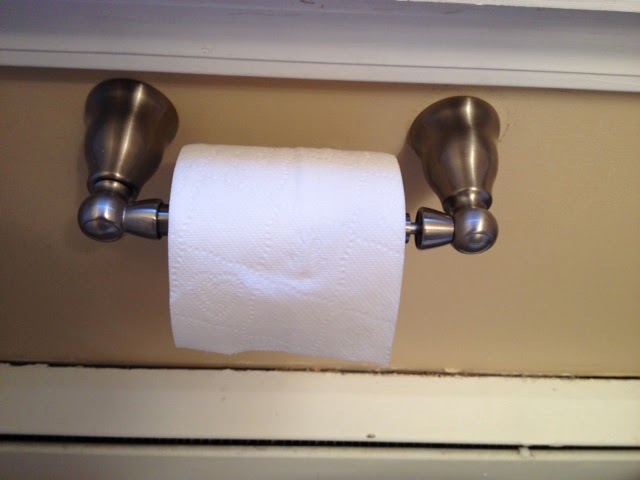 On my day off this week I installed a new toilet paper holder.

Now you should know I’m not the handiest person around. While I can accomplish some simple household tasks, it always takes an extra measure of effort and concentration. I was prompted to do this only because my old toilet paper holder had fallen off the wall one time too many and I had had it.

So it was that I went out and bought a new toilet paper holder, brought it home, and took it out of its package.  I studied the instructions carefully, or so I thought.  I figured out how to take the set screw out with the tiny Allen wrench which was provided — even though the instructions didn’t exactly tell me how to do that.  And I gathered up my electric drill, my measuring tape, and a pencil.

Now I did notice there was a template provided in the instructions, but I thought that was a bit superfluous as all I needed to do was hold the mounting bracket against the wall and mark where the holes needed to be.  I did so.  Once I measured the required distance between the two brackets and I marked again, I started drilling.

Well, in spite of my careful measuring, it turns out that I put those brackets too close together. So I measured again and moved the left one over.  This time?  They were almost too far apart, but I figured they were close enough to actually hold the toilet paper — as you can see in the above picture. This was good enough for me, for this much I do know: too many holes in the dry wall and it won’t hold anything. So no, it’s not perfect, but it’s not too bad for someone with my particular skill set.  Or lack thereof.

Here is what I discovered later though. As I went to recycle the instructions, I realized that the included template not only showed how far apart the screws should be on each bracket, but how far apart those brackets should be placed on the wall.

And so it is that I have learned once more that templates are not so superfluous after all. No, in fact, when used they can give us something to measure against so that our home improvement projects hold up. Templates — or guides or examples — in the rest of life aren’t so bad either.

Now I know that the story before us now is so much more than a template. For one thing, the cosmic battle which Jesus successfully engages in while in the wilderness demonstrates how very different he is from any one of us. Even more than that, we are reminded that in these verses the stage is set for Jesus finally vanquishing evil itself on the cross so that you and I won’t have to.  Even so, I have spent enough time in the wilderness to know that it is also ours to come up against evil in powerful and terrifying ways and I find it profoundly helpful to know that Jesus has already been there. Indeed, I have found it to be pure gift to be able to lay my experience alongside his and to look for wisdom on how to deal with even those smaller battles which are mine to engage.

The only challenge is that in Mark’s Gospel we are given so little to go on.  I mean seriously, it might almost be possible to miss the piece about Jesus and his forty days in the wilderness when we come upon it here.  For as you can see, it is but two verses nestled between the dramatic account of the voice of God sounding his identity at his baptism and Jesus’ first sermon which quickly follows. You might almost miss it.

Indeed, we are left without the detail of the story we hear in Matthew and Luke — most especially that specific triad of temptations which we almost cannot help but superimpose on Mark’s telling as we listen in now.  No, this time through this is all we get:

So no, there really is not much to go on here. All we know is that the wilderness Jesus encountered held great danger and that he was powerfully protected at the same time.

And while at first it may not seem like much, maybe it is still enough.

Indeed, perhaps it is enough to know that for all the terror the wilderness can hold, God’s promised protection is there for us, too, even as it was for Jesus. And as we remember this?  Perhaps our deep remembering is also enough to enable us to withstand the evil which threatens to overcome us when we find ourselves embattled, too.

I have been especially taken in these last days by the story of Kayla Mueller, the young woman who recently died while in captivity by the terror group, ISIS. If you have not yet spent time with the letter she managed to send to her family through others who were released, I would strongly commend it to you.  You can find it in its entirety here:
I’ve had my share of wilderness times, to be sure, but none like the one this young woman endured. In the midst of her imprisonment she managed to get out a powerful witness as to what sustained her then. I am especially struck by the following part of her letter to her family which was written nine months ago:

“I remember mom always telling me that all in all in the end the only one you really have is God. I have come to a place in my experience where, in every sense of the word, I have surrendered myself to our creator because literally there was no one else… by God and by your prayers I have felt tenderly cradled in free-fall.  I have been shown in darkness, light and have learned that even in prison, one can be free.  I am grateful.”

It seems to me that if there is a gift in wilderness times it is this: we are reminded that ‘in the end, the only one you really have is God.”  And what a wonder it is in such times to experience being ‘tenderly cradled in free-fall” by that same God.

It would appear that we are given more in this small part of this young woman’s letter than we have in today’s Gospel’s rendering of Jesus’ wilderness time.  Even so, I can’t help but believe that Kayla experienced some of what Jesus did — that she came to the same conclusions that Jesus did.  For through the rest of Jesus’ ministry: his living and finally, especially in his dying, he surrendered to the One he called Father.  This is where it breaks down though. For Jesus did not only witness the light in the darkness.  Jesus is the light in our darkness.

I don’t know about you, but the next time I find myself embattled? The next time I find myself in the wilderness?  I will carry both of these examples — both of these ‘templates’ with me and others, too, of those I have known who have come through such wilderness times to the other side.  Oh yes, if I can but remember that God is all there is AND if I can trust myself to be “tenderly cradled in free fall” by God’s great love? I expect that will be more than enough.