As I write this week I realize that I am only at the beginning of my thinking about this difficult parable. These past days have been full of meetings and hospital calls and as the week drew to a close I came down with a nasty bug which, I don’t doubt, is clouding my thinking still. I hope that my first thoughts below will somehow be gift to you to prompt your own wondering at Jesus’ teaching in the days to come. Perhaps this time through we can find our way to proclaiming the Good News side by side….  Blessings to you.  Janet

There is no question about it, this is one of those parables which is hard to preach.

Along with you, I’ve read all the commentaries. For the most part, those with a lot more scholarship behind their names than I, do not know what to make of the parable before us now. For even though in the end, the master commends the dishonest manager for his shrewdness, he hardly seems like one we should emulate as we seek to live out our faith in the world. Indeed, it is impossible for us to tell where the communication broke down in the relaying of the story, for one can’t help but think that must be the case:

So it is that at least for now I am taking it at face value in a way, it is true, it may never have been intended.  This is where I am starting today:

It is one thing to live out one’s faith in an exemplary way in the relative safety of a congregation’s nave or social hall or Sunday school classroom (although we all have countless examples of times that has not been the case.) It may be entirely something else to do so in the world which is marked and shaped by other values, which holds hopes and dreams which seem to have nothing whatsoever to do with the message and meaning of our faith.  Indeed, so very often we find ourselves making choices as we remember that, in Jesus’ words, “no slave can serve two masters… you cannot serve God and wealth.” And sometimes the ‘right choice’ is not entirely clear. It can get messy. Just as it did for the manager here who wound up collecting ‘short’ on his accounts in order to somehow ensure his own future.

It can get messy as we seek to make the right choices. I would offer here a couple of examples of how those who gather might just know this to be so.

Next Sunday is Confirmation Sunday at the congregation I serve.  We spent some time with our young people yesterday on a mini-retreat and as we sat down together I asked them about choices they have had to make. One spoke about giving up volleyball because it conflicted with soccer because the schedules overlapped. Another chimed in with making a choice for golf over basketball. And yet another shared that he was always making choices about how to spend his time, particularly about which friends would have his attention at any given time.

Though not simple to a fourteen year old, these do seem relatively easy choices compared to what is ours to ponder later in life. Indeed, the choices of which they spoke were likely choices between two different good options. And while sometimes this is how it is as we sort out our call to live out our faith in the world, often the choices are starker as we discern which ‘god’ we are called to serve. But even then, as we feel our way, it still sometimes gets as messy and compromised, if you will, as it did for the man in the parable before us now. Often we do simply find ourselves doing our best, or what we think is our best, in a world of hard choices. And then we lean on God’s grace and goodness to hold us as we end one day and begin another.

So today I would offer two examples of this — two examples of a couple of people I know who are trying to make these hard choices ‘out there’ in this messy world we share. Two people who are sorting out ‘which master they will serve.’ The first comes in a portion of a faith statement from one of our soon to be Confirmands. In reflecting on his confirmation verse, he wrote this:

“Even though I walk through the darkest valley, I fear no evil; for you are with me; your rod and your staff- they comfort me.” Psalm 23:4

This is my favorite bible verse because I value friendship. I think friends are gifts from God, even though some friends might not be there for you for your entire life, I believe that in every friendship is a lesson. Those lessons are gifts, those lessons are what makes a friendship worth having. My best friend Austin has taught me lessons. Austin sticks up for me when people aren’t being inclusive, and I value that in a friend, I guess you can say I learned how to be a better friend because of Austin. Before I met Austin, if a kid was being picked on, I would just be a bystander. If I was put into that situation now, I would use what Austin taught me and, I would try to stick up for that person. I think that is a gift, the only reason I was able to learn that lesson is because God put Austin on this planet, and he made us meet. That is one of the many reasons I have faith.

As you can see, this young man is sorting out how God is alive and active in his life and he is wondering at what it means to live his faith in a world where bullying is a real challenge. For him, as for all of us, it is a matter of deciding what it is to ‘serve God’ in the midst of tough every day choices.

Some of you know I have been corresponding with a woman in prison.  This week a friend of hers decided to writ 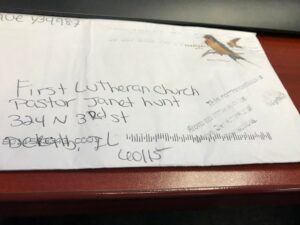 e to me as well. When the envelope arrived stamped with the usual message that it was correspondence from an inmate from the Illinois Department of Corrections, I did not know quite what to expect, for the name in the return address was only vaguely familiar to me.  I opened it up and no fewer than eight pages spilled out filled with the rough handwriting of a 37 year old woman who, it turns out, had only learned to read and write a few years ago. Three of those pages told me her story. The other five pages were full of prayers she had written.

Here is what was spilled across those pages.

She told me she is mostly cut off from her family. For her own safety, she shared.

And this. She is writing a book for young girls. She wants to share her story in order to help others like her to find their way. She wants to urge them to start by loving themselves. As she did not for so long.

She did not write much about her life in prison. However, you can be sure that every single day is marked by messy decisions as she seeks to serve God who clearly has made God’s Holy Presence known in her life.

So, no, I really do not know how to begin to preach the parable before us now. Along with the rest of you, I stand in the middle of these confusing words and I only have this. Just like with the manager in the story before us now, it is a messy world we are called to live our faith in. Indeed, whether it is as a freshman in high school, or a woman serving her time in prison who just learned to read and write, or you and me, in and through all the various places God calls us, it is in this ‘mess’ that we are called to sort out who we are serving and how. I do not expect we will get it exactly right on the first try. Or even the second or the third. I do expect and believe this is holy work we are called to and that it matters what and how we seek to  do it in the midst of all these ‘messes.’ And I trust this. That as we get clearer about who it is we are serving, our living will be all the better for it.

So at this point, it seems this is all I have this time through. Whether it was meant to or not, the confusing nature of the story Jesus tells today simply reminds me of what a challenge it is to sort out what it means to live in faith in a messy world. I can only trust that God holds it all as we do our best to serve the only master who will give us life, that God will redeem that which is worth redeeming, and cast the rest aside.  How about you?