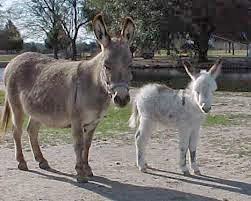 I find myself thinking about the donkey and her colt which
Jesus rode into Jerusalem so long ago.

Now let me say first that I never much thought about the donkeys before, but this time through they caught my attention and my imagination.  As I have sat with them this week, I have come to know some new things.  But first let me offer what I thought I knew, but apparently did not. (I do recognize that there are those among us who hold first hand experience of donkeys.  I do hope you will share what you know!)

First, many of us do tend to think of donkeys as stubborn— thus the expression “stubborn as a mule.”  And yes, as I understand it, they are known to be stubborn.  It turns out this is because donkeys have a strong instinct for self preservation. They will do all they can to keep themselves out of harm’s way.  I would guess — although I have to say I haven’t actually done it — but I would imagine this is why one rides a mule train and not horses down into the depths of the Grand Canyon.  For if they are known for keeping themselves safe, they will surely keep you safe as well.  And yet, while they are known to be stubborn, apparently once you earn their trust, they will mostly do whatever you ask.

And I have to say that when I have had cause to think about them, I haven’t thought of donkeys as being all that smart.  I turns out they are.  Indeed, just check out this timeline of the ‘history of the mule’ here.  For that matter, for some of us of a certain generation, that erroneous understanding of a donkey’s intelligence may be been forever debunked by our acquaintance with Donkey in the movie “Shrek.” For he was certainly ‘smart’ in all the right ways.

As I think through what we know of donkeys from our faith journey, I am struck by the parallels:

For instance, King Solomon, many generations before Jesus, rode to his coronation on a mule or a donkey. (See 1 Kings 1:32-37)  This is certainly a reflection of royal humility.  In the same way, Jesus rides a donkey here.  Only before he’s done, this King will wear a different kind of crown.

And there is this as well.  Some of our most beloved images of the Christmas Story include Mary, with Joseph walking beside her, riding a donkey into Bethlehem. After that journey, of course, Jesus would be born. Mary’s suffering would lead to life. Today we see Jesus riding a donkey into Bethlehem — towards his death and not his birth.  This suffering would lead to life for all the world.

Finally, here is what I have learned of donkeys in these last days. I do have to say that these small pieces of information lend new insight and have really made it all come alive for me:

Apparently there are more than 40 million donkeys alive in the world today.  Ninety-six percent of them live in underdeveloped countries.  They are owned and used by poor people.  They serve as pack animals.  Their energy and movement is harnessed for pumping water for the thirsty and milling grain for the hungry.  Knowing this, is it really any surprise that Jesus, who so identified with the poorest of the poor that he said, “For I was hungry and you gave me something to eat; I was thirsty and you gave me something to drink” (Matthew 25:31-46) would ride into town on the service animal of the poor?

And there is this, too:

Sometimes donkeys are used to protect sheep and cattle and goats.  (Follow this link for an example.)  Evidently once a donkey has bonded with a herd, it will protect them against canine predators such as foxes and dogs and coyotes in the same way it would protect one if its own.  At night when it beds down with the animals if it hears a strange noise it will bray a warning to the herd and then will chase, often trampling, the predator.  And again I wonder: how fitting is it that the one who said, “I am the Good Shepherd” should ride a donkey into Jerusalem.

And this is the piece I expect I will never forget:

Donkeys are herd animals.  The strongest donkey will always be chosen to be leader of the pack.  In the wild, that lead donkey will stay to ward off an attack by a wolf or other predators in order to allow the rest of the herd to escape safely.  Once again: “I am the Good Shepherd.  The Good Shepherd lays down his life for the sheep.”  (See John 10.)  Of course Jesus rode into Jerusalem on a donkey!

For we know that Jesus could have walked into the city that day.  Or for that matter, he had some connections with the wealthy (think Zacchaeus or Nicodemus.)  Certainly he could have borrowed a horse instead.  Rather, he sent his disciples to get a pair of donkeys:

The pack animal of the poor.

The protector of the vulnerable.

The one willing to die so that others might live.