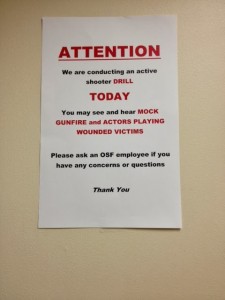 I was late arriving at the hospital yesterday morning — my first day back from vacation.  When I stepped into the waiting room to catch up with the family I was greeted with the words, “You’re just in time.”
I had seen the signs posted downstairs about the drill, but in my rush I hadn’t paid much attention.  It turns out the hospital would be running a Code Silver drill in a matter of minutes.
Just after the doctor came out and told us that all had gone well, the alarm came over the intercom.  A ‘shooter’ was making his way down the Pastoral Care Hallway.  Seriously…
So together we were shepherded with several others and a hospital volunteer into a small room normally used for consultations.  In an effort to keep the experience somewhat ‘authentic,’ we were told to silence our cell phones. We had been told that there would be real actors in make-up acting the parts of shooter and victims. We had also been told that all the real activity would take place on the first floor.  We were on the second.
At first the volunteer assigned to us was chatty, regaling us with stories of her 55 year old long marriage and how her husband still worries about her.  I think underneath her jovial presentation she was a little nervous though, for pretty soon our designated volunteer/guide got serious and told us to turn off the lights for we had heard voices out in the hallway.  She peeked out the door and saw police officers coming towards us.  Indeed, she knew the ‘drill’ was being graded and she wanted to do this right — or at least not to be caught in doing it wrong.  Some among us kept chattering but she quickly shushed us and for the next thirty minutes we sat in the dark with strangers and friends, alone with our thoughts.
It was restful, to tell you the truth.  I knew this was only a ‘drill,’ of course, so it wasn’t hard to disengage from the experience some, but it was also so that I had been up since 4 a.m. and I welcomed the chance to close my eyes and breathe for a time.  Before we knew it, the ‘all clear’ was sounded and we stepped back into the outer waiting room where all sorts of others spilled in, too … each with our shared but different experience of being part of the hospital drill that day.  One man across from us wondered at why they would choose a busy Monday morning for such as this.  Why not do it when the hospital wasn’t so busy?  I let his question lie there — it would probably have been insulting to say that was probably the point.  What’s a drill if there aren’t people to practice?
Hospitals and schools and others do these drills now. They practice what could one day happen but all pray never will — moving into locked, darkened, hopefully safe places as we wait for the danger to pass.  Those of us who just happened to be there yesterday morning won’t hear about what comes next… the reviewing, the critiquing, the learning so as to do it better next time when it could be real.  We ‘prepare’ by practicing. We get ready by pretending it is already so.  In these cases, we let our minds linger for a time on the unthinkable, so should that time ever come we will be ready.
Indeed, one can almost hear the echo of  John the Baptist in our experience yesterday for John is calling upon anyone within range of his voice to get ready.  Only his isn’t just a drill.  He is calling upon us to ‘make ready’ for the coming of Jesus who was on the horizon and even now is both present with all of us and will return in all of his fullness one day.
I t is not a perfect analogy, of course, and yet John’s words do carry warning.  They are meant to move us to places of shelter and safety in Jesus’ tender care.  Only this is not some ‘test’ to be critiqued and graded to make us more ready for the next time or the real time which could happen one day.  This is a call to preparedness meant to wake us up and change us now for this life today.
And yes, it is so that  in a way we can think of Advent functioning in this way for us.  I suppose it is a kind of practice drill for us: a time for us to stand still in and take seriously the scenario John describes.  Only truly, it’s not a matter of ‘if’ but of ‘when’ for all of us.  The day John describes has come and will come again.  Once, to be sure, and maybe once and again in ways different and the same for each of us.

And so I wonder with you now: