I know these words by heart by now, which is why, I expect, I find myself pausing in them again once more this year. For it had been a busy week and I found myself alone on a quiet drive home late the other afternoon. I had forgotten to bring a copy of the lessons with me, but I knew this was one of them and so I spent a bit of time repeating what I know so well and wondering at what would capture me this time through. Over and over again I found myself pausing here: “Even death on a cross.”  For I know this to be so by now. I have stood at the foot of the cross for so many seasons now that more often than not, I can almost forget the horror of it. Recognizing this brought to mind what a friend shared with me some time back.

They were in worship on Good Friday with their son who was then still only in preschool. He had grown up in church and as a young child he had already come to know Jesus as his beloved friend. Perhaps it was so that this was the first year he paid attention or that he was able to comprehend, but as the story was told and the reality of what happened to Jesus on the cross played out in his imagination, he turned to his mother horrified. And he had to be carried, weeping, from the nave.

I do not recall ever having that visceral a reaction to the scene we will re-enact in one way or another in the days to come. In fact, I know that for me and for many the cross has long been sanitized to the point of our almost forgetting the violence and the shame one so crucified would have suffered, not to mention the terror which would have been struck in the hearts of anyone close to him — the fear that they could well share the same awful fate.

Indeed, if you step into my office at church or into my home you will see evidence all around of the cross, but the replicas which adorn my walls are mostly bright and colorful, worn smooth and beautiful by artists from all over the world. Some of these I have gathered on my own. Many are gifts from others who, not knowing what else to give the pastor, have given me a cross. Oh, surely we can say with confidence that our understanding of the ‘cross’ has been transformed by the resurrection promise. Even so, there is some important good to be had, isn’t there, in standing still in the unspeakable sacrifice of that Friday and realizing ever more fully the magnitude of the undeserved gift we were given then? A sacrifice which was raw and real and none too pretty?

And so it is as I considered in these days the truth that Jesus ‘became obedient to the point of death — even death on a cross — I have stood still with some of these crosses which have hung on my walls for so many years sometimes I hardly see them any more. 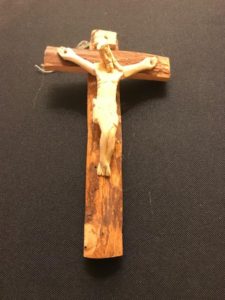 Indeed, there is one in particular I have especially loved. It is small and it bears the figure of Christ hanging there. It cost me very little — I purchased it at a roadside stand outside one of the San Antonio Missions many years ago. Perhaps you can tell in the photo here that  it is roughly made and the wood is soft. I imagine it was carved quickly by one who was in a hurry to create more of them to sell to tourists like myself.

For while my questions above are about a time and place centuries removed from where we are today, it is still ours to be vigilant in always sharing God’s love first — with no strings attached — to those in our midst today. Whoever they may be. Perhaps my wondering about a carving of wood which hangs on my wall can also be a call to this. To take another step in reaching out to or in advocating for, those on the edges of our world now. Those for whom Jesus surely died as well.

For Jesus was obedient to the point of death — even death on a cross.

And so that we might look unflinchingly at our own, at my own, unending need for forgiveness and seek with God’s help to do better.

At least this is what I find myself pondering in this season as I look at this little cross of mine and wonder about its origins and the story that may forever be untold.