I was driving home from some time away this week-end.

If you have ever headed north on Highway 65 through Alabama, perhaps you have seen it, too. It’s a billboard shouting the threat: “Go to church or the devil will get you!” The words are in bold black lettering.  And yes, they are accompanied by a life-size, or at least human sized, red devil, complete with tail and pitchfork.

I laughed to see it, for the threat voiced is so far afield from my image of a loving God — one that I have been raised on and nurtured on and have done all I can to pass along to others. I laughed, I did, and it would take multiple blog posts to deal with all the differences. And yet? I am perhaps more deeply aware today than I have ever been that not everyone sees or experiences God as I do, as I expect you do. No, in fact, some hear the callings that Samuel heard so long ago, that Philip shared with Nathanael centuries later, that you have heeded and followed, too, not as calls to servanthood, but to domination, not as sources of comfort for everyone, but only for very limited circles of people who apparently only look and live like they do. Some, perhaps many, see a God of vengeance and violence and are patterning their lives after the same.

Perhaps I shouldn’t have been, but I was a little. I was shocked to see a “Jesus Saves” sign floating in the midst of a violent scene on our nation’s Capitol steps this week. For 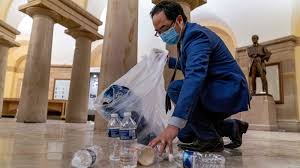 surely the Jesus of love and forgiveness, healing and hope, was not present in the rage, the hatred, the pain that played out on Wednesday afternoon. Not at all. No, in fact, the closest representation I saw of the God I know was seen in Representative Andy Kim from New Jersey who was photographed bending down and picking up the trash left behind by those who let hate lead the way that afternoon.

I don’t get it, I really don’t. I don’t get the appeal of one who always seems to lead with such blatant self interest, who is known for bullying, for abusing, for cheating, and for far worse. And yet, half of my neighbors see something there I expect I never will. And at least some of them appear to follow in the name of their faith.

So it is as I sit down to write today, I have to say that I am not certain what the call that Samuel heard, that Philip heard, that Nathanael heard, that you heard, that I heard, means for this moment in time. I am not at all sure what it is to pray and preach, listen and lead in a time and place where I cannot seem to begin to understand what others are seeing and hearing. And doing. And so I simply return to the stories we are offered now and this is what I am beginning to hear:

God called Samuel by name and once  Samuel figured out who was summoning him, all Samuel was expected to do in those first hours was to speak the truth as it had been told him. And so he did.

And so perhaps it is also for you and me today to simply speak the truth. And if that truth includes (as it does for me) bewilderment, shock, grief, anger, then perhaps that is how we lead. And yes, this as well. We know what God looks like and we know that what we witnessed this week bore no resemblance to a God of grace, a God of servanthood, a God who puts others first, a God of hope. This truth is ours to speak and to keep speaking. No doubt, Samuel’s doing so was not without risk. The same is likely true for us as well.

As for this story of Jesus calling his disciples near the beginning of John’s Gospel, I am always struck by how Jesus calls and then one goes to another (and likely to another and another after that) simply inviting them to ‘come and see.’  And that when, in this case, Nathanael comes to see, Jesus already knows him. There is a lot to be taken from this account, but I am settling for now on this: it would seem that this call is heard and extended and passed on often first in and through relationships of trust.

Similarly, over these past years it is only within such relationships of trust inviting me also to ‘come and see’ that I have been led to know that this much is true. What we witnessed on Wednesday which can certainly be described as an attempted coup (for some in the name of Jesus) was shocking to me.  I expect it was less so to neighbors and friends — and here I am thinking of people who have long been victims of the sort of white supremacy which was on full display the other day.  It is from them that I have learned and I am still learning to look such evil straight in the eye. For yes, they are Philip to my Nathanael, urging me to see what they have always seen. And in and through it somehow to see beyond it to Jesus who calls and calls and calls. And empowers. And strengthens. And heals. And offers reason for hope.

Without a doubt, this much is true. This is a time for truth telling as best and as clearly as we can. We may falter and I expect we will, particularly as we find ourselves speaking in times and places and among those for whom our experiences and understandings of what is playing out before us and between us differ so. But we dare not stop. Too, too much is at stake.

Indeed, at this point I am speaking beyond even an attempted coup in our nation’s capital, although that needs to be addressed and quickly and those responsible held accountable. Even so, I find that now I am led beyond that. I am speaking of the hearts of those who are so broken, so afraid, so… well, I don’t know what… that they would put themselves in the service of hate in the name of Jesus. Or would support others who do so.

I don’t get it, I really don’t. But that does not seem to stop God from calling in the night, inviting me, inviting you, along with Samuel to simply speak the truth we have been given to speak.

I don’t get it, but that doesn’t stop all sorts of Philips out there from summoning the Nathanael in me into the presence of Jesus where it is even safe to acknowledge what is broken, what is heartbreaking, what is downright evil and to know that in the midst of all that especially,  Jesus welcomes me and is urging me, urging you to seek to live ever more surely as a servant of God and neighbor. Speaking truth, yes. But modeling a way of love and sacrifice that in the end does more to win hearts than all the shouting in the world that I am tempted to do today.

That’s all I have today. I trust, I know, you are hearing your name being called as well. I am eager to hear what you are hearing, learning, experiencing, and yes, doing, in these critically important days. God bless you in all of this. Know that I hold you, I hold all of us in prayer.