Can these bones live?

For as long as I have been a pastor, I have preached in stories. The challenge in these last weeks, though, has been that I have no stories, no actual experience of a time such as this. I expect you don’t either. As a result, I have found myself leaning heavily into the sacred stories passed down to us. The raising of Lazarus which is told this Sunday is perfect for a time like this. So is Ezekiel’s vision in the 37th chapter.

We know this one well, of course. It has long captured our imagination in such a way that we may find ourselves singing about ‘dry bones’ even before we remember how Ezekiel’s vision must have lifted a people in exile so long ago. We know this one well. And yet, even so, it is hard to find a more contemporary ‘story’ which brings it alive.

So it was in these last days I decided to dig deep into what we know of the flu which swept the world in 1918, leaving millions upon millions dead in its wake. At first all I could uncover was statistics. And then I came upon the stories of those who remembered those devastating losses. And then I found this: the story of ‘dry bones living’ in the pursuit of one particular scientist over the last century.

Johan Hultin was a Swedish microbiologist studying at the University of Iowa. In 1951 he was looking for a topic for his dissertation work and was inspired by the suggestion that someone ought to go dig in the permafrost of the northern reaches of this continent. Certainly there would be still frozen in time there tissue samples of those who had died in that pandemic.

And so he did. He traveled to Brevig Mission, Alaska where some accounts have it that 72 of the 80 residents of that village died over the course of 5 days in November of 1918. He met with the village elders who gave him permission to excavate the mass grave. He was successful in finding well preserved tissue samples which he returned with to his lab in Iowa City where he began to try to grow the virus. It didn’t work. To be sure, it was 1951. His imagination was running far ahead of what science could do at the time.

Indeed, can these bones live? 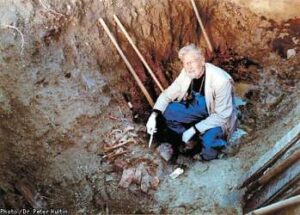 of Pathology in Washington, D.C., describing his own pursuit of what had led Dr. Hultin to Brevig Mission so long before. Only the tissue samples which had been preserved on slides with which Dr. Taubenberger and his team were working were limited and small. Dr. Hultin wrote him a letter telling him he knew where he could get him what he needed. And at the age of 72, back to Brevig Mission he went. (He is pictured here in that grave which held so many who had died.) This time he came away with two perfectly preserved lungs of a woman who would have been in her mid-20’s when she died.  And within ten days, scientists were able to reconstruct the entire genome of the virus —- enhancing treatment for flu ever since. (As you know, I am no scientist and have only a rudimentary understanding of these things. The best  account of this bit of medical/scientific history which I found was on the CDC website at this link.)

I love this story for the way in which it speaks into our current situation. God keeps on using gifted people to make bones ‘live.’ Even now.

I love this story for the way in which it plays out over time, especially for the way in which one scientist’s imagination was sparked half a century before, and even thought his project ‘failed’ then, the hope for discovery of that which could bring healing and life to the world never really left him. 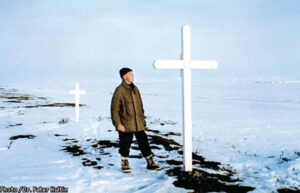 I love this story for this. In 1951, Johan Hultin traveled to Brevig, Alaska. He took pictures. When he returned to that mass grave 46 years later, it was the same, only the white crosses which had marked that grave had long since disintegrated. Before he left, he built new crosses for the people there as a token of his own gratitude for the gift they had given the world in allowing him to dig up that sacred place again.

And I love this story for this. I am reminded through it that  in the end, God always brings life out death. Always.

In times like this, we are well served by returning to the ancient stories which have always uplifted God’s people. I am also grateful to be able to find more recent examples of what God has always done ‘in making dry bones live.’ Indeed, I am surely grateful today for the gifts and the tenacity of one scientist, Dr. Johan Hultin and for the people of Brevig Mission, Alaska, who made this story possible.

Do know that I hold all of you in my prayers during this time. Please let me know how you are doing.