When I was in college I had a summer job working at Del Monte in my home town.  Pea Pack would start mid-June and run deep into July.  It was good work, although I have to say  I was especially grateful to be assigned a job which was at least a little bit challenging. From 5 p.m. until the second shift ended, I tested peas.  My work had some bearing on what label wound up on the cans of peas which were processed that night. The ‘tougher’ peas would get the store brand while the tender young peas would leave the factory bearing the Del Monte label. 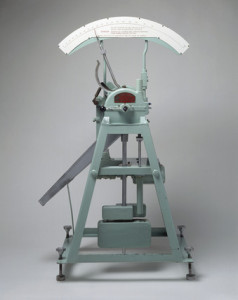 So every night several trucks an hour would pull up and I would take a couple of buckets of peas off them and run the peas through a series or tests.  First I would pour a bucket of peas through a ‘shaker’ which would sort the peas by size and which would sift out the waste.   Each drawer of the shaker would be weighed and recorded and then each size would be put through the ‘tenderometer’ to be measured for its tenderness and recorded again.  (This was almost 30 years ago now, and I still remember every detail of the work, for it was a task repeated over and over again!)  I was delighted to discover a photograph of a ‘tenderometer,’ circa 1938, just like the one I used, which you can see here:

Nearly all of those summer nights run together now, but there is one I will never forget.  I had taken several bucketloads of peas off a truck and had dumped the first bucket into the shaker.  After the peas had shaken down, I pulled out the top shelf and there in the midst of the usual waste was a piece of glass the size of my thumbnail.  I stared at it for a long moment weighing my options.  On the one hand, it could well be an exception: the only piece of glass on the load.  And yes, it is true the truck had come in without a tarp on it, but it didn’t seem likely it had picked up any glass in that way. I finally did what I knew I must do.  I walked across the street to the scale shack.  Mr. Folkerts, our high school English teacher, was sitting in his usual place behind the counter.  (Second shift pea pack was also his summer job.)  I placed the piece of glass on the counter and pushed it across to him.  I can still recall him looking at me over his glasses.  I could not then and dare not now presume to interpret his look, but we both knew what had to happen next.  He called down to the plant and within the hour eight thousand pounds of peas were dumped into a nearby farmer’s field. For at best, if more glass was discovered, it could halt the operation of the cannery that night.  At worst, it could wind up on someone’s dinner plate.

Oh, it is hard at first to hear the good news in John’s preaching now.  It is difficult to think of Jesus with a winnowing fork in his hand — sifting out the good from the bad, the waste from all the rest. And yet, what a wonder it is to think of God taking the time to sort out, to sift through what is good and what is not so good in me.  We didn’t have the means to do so for that load of peas that night so long ago.  We didn’t have a backup plan for more wisely disposing of four tons of peas, most of which would have safely fed a whole lot of hungry people for many, many meals.  And yet, God does. God always does.

By now you can hear how I hear John’s word for us today.  I don’t think of Jesus sorting out the good people from the bad ones.  No, my observation and experience and deeply held belief is that there is no one beyond the reach of God’s redemption.  So it seems to me this is what Jesus does, over and over again, in all of us.  Jesus sorts sorts out what is worth keeping in me and tosses aside all the rest.  And yes, most of the time that process is awfully uncomfortable.  But the good news is that God is willing to do it. No matter the effort it takes, the time it takes, God is willing to do it.  And what a wonder that is!