“Now when these things begin to take place, stand and raise your heads, because your redemption is drawing near.”  (Luke 21:28)

It is unexpected, it seems to me— this kind of posture in the face of the struggle described in Luke’s Gospel now.  Natural disasters are all about.  People are fainting out of ‘fear and forboding’ at what is coming upon the world. Even the powers of heaven will be shaken, we are told.  It is surely not typical or expected, it seems to me, to stand up and raise our heads when calamity is happening all around us.

In fact, I got a glimpse of its opposite just last week.  It was at the end of the funeral of a young man.  His death was entirely unexpected and there was not a person in the room who was not shaken.  His family thought it was the flu.  It turns out it was something much more profound and he died before they could get him medical attention.

At his mother’s request the casket was left open. She was not yet ready to say good-bye.  So in the time we shared, I preached and prayed and commended him into God’s eternal care.  And then the mourners filed by the open casket, one by one, pausing a moment to gaze at the lifeless face of their neighbor, friend, nephew, grandson, cousin, brother, son.  Other than his parents, it was the young men who moved me the most, somehow.  All in their mid-20’s they approached the body of their friend one by one or in pairs.  You could see in their postures how very tightly they were holding themselves.  If you looked at their faces you could see how hard they were working to hold back the tears. Their heads were bowed… staving off the suffering they did not want to feel or to show.

It’s not the kind of disaster Jesus describes in our Gospel lesson for the First Sunday in Advent.  But it had shaken their worlds nonetheless and their individual and collective instinct was not to stand tall looking for redemption.  No, rather, they bowed down, seeking to protect themselves from that which they could not fight or change.

So as I said, I find it quite remarkable that the call of this Sunday’s Gospel is to stand up straight, expectantly, with our heads raised and our hearts watchful. As people of faith you and I are called to assume a posture of hope in the face of such despair. As I first think about it, it strikes me that to do so must be an act of determined will, for it runs contrary to our most basic instincts.

Indeed, it’s hard to comprehend the promise that is meant for us beyond all that is described today.  It is difficult to believe that there will be anything more than what we can now see.  In fact, I’ve struggled to offer some way in which we can begin to be and do as Jesus calls us to be and do today.  How is it that we stand with our heads raised in hope in the face of suffering and despair?  I wondered all week at this, and then I realized the answer was right in front of me.  Or at least the beginning of an answer is there: right there in those young men at the end of that funeral last week.

For as you know, a whole lot of people — perhaps especially people their age — would not have shown up for their friend’s funeral last Friday night.  How many times have any one of us been at least a little bit tempted to stay away because ‘we want to remember them as they were’ or ‘I didn’t really know his family anyway’ or, if we’re more honest, just because it would be too hard. And yet, those young men showed up anyway.  They didn’t take the easy way out. They showed up and stayed until the end. They allowed themselves to encounter the suffering of their friend’s brokenhearted parents.  And they walked into their own pain as well.

Perhaps this is where it begins. In our walking into our own suffering and the suffering of others.  In our willingness to stand up and be seen and heard in a world that is shaking all around us.  Oh, at first our heads may be bowed as we brace ourselves for the pain, but I expect that will not always be so.  For as we step into the large and small heartbreaks we live through, we will meet Jesus there where he has always been.  For that is where Jesus always is: waiting in the midst of the pain to somehow show us the way to new hope and new joy and new life.

And once we’ve done that for a lifetime?  Once we have experienced the gifts of God in such unexpected places over and over again, I would guess that when Jesus does return — whether it is only to me at the end of my life or to us all at the end of this age — well once we’ve done that for a lifetime?  I guess we won’t be able to keep ourselves from lifting up our heads in hope to see our redemption drawing near!  Because we will have already encountered the source of that redemption in Jesus over and over again! 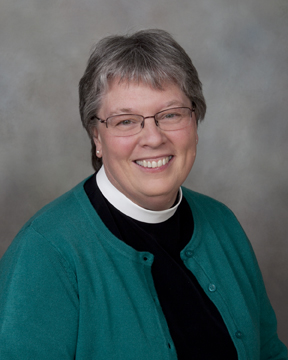